Nearly roughly two weeks after European regulators has asked Google to halt the process of its new single giant privacy policy – suggesting they need to investigate whether the proposals truly protects users’ personal data or not, US not-for-profit organization Consumer Watchdog has written to the US House of Representatives’ Commerce, Manufacturing and Trade Subcommittee, asking Google’s CEO Larry Page to appear and explain Google’s “single giant policy” purpose and how it supposed to be on its commitment to users’ privacy.

Google, which earlier stated, within a month’s period, is gearing up to change its current privacy policy – merging its all 60 different product policies into one, resulting into a one single big product. Once you opt-in you can’t stop using all Google products – the change will take effect on March 1. Google at its extent refused to pause its privacy policies toll out in its last letter. 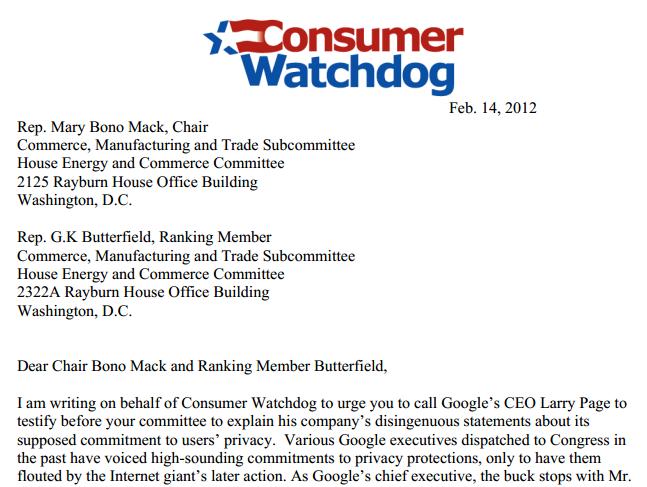 The letter starts on the note:

I am writing on behalf of Consumer Watchdog to urge you to call Google’s CEO Larry Page to testify before your committee to explain his company’s disingenuous statements about its supposed commitment to users’ privacy.  Various Google executives dispatched to Congress in the past have voiced high-sounding commitments to privacy protections, only to have them flouted by the Internet giant’s later action. As Google’s chief executive, the buck stops with Mr. Page.  He should be called to explain the difference between his underlings’ statements and the company’s actions, particularly the recently announced change in Google’s privacy policy and how it handles user data across its services.