According to comScore latest month released research report of the US search marketplace, Google Site hits high with 66.8 percent of search queries conducted in June (up 0.1 percentage points), followed by Microsoft Sites with 15.6 percent (up 0.2 points) and Yahoo! Sites with 13.0 percent. Ask Network accounted for 3.0 percent of explicit core searches, followed by AOL, Inc. with 1.5 percent. Talking about explicit core searches, there are total of 17.1 billion such searches were conducted in June (down 2 percent), with Google Sites ranking first with 11.4 billion. Microsoft Sites ranked second with 2.7 billion searches, followed by Yahoo! Sites with 2.2 billion, Ask Network with 516 million and AOL, Inc. with 265 million. 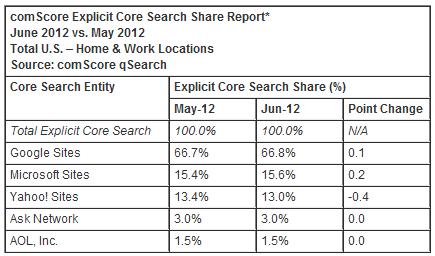