According to the latest data from comScore, it has been revealed that Apple lead as top US smartphone maker while Android down for second month in a row. The research firm reported that about 133.7 million people in the US owned smartphone during the period of three months ending February, which was up 8 percent since November. 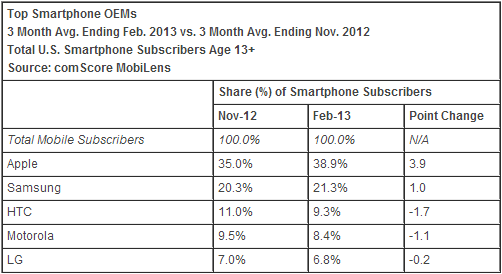 Apple reportedly topped the chart as the top OEM with 38.9 percent of US smartphone subscribers, up 3.9 percentage points from November, while Samsung ranked at second position with 21.3 percent market share, up 1 percentage point, followed by HTC with 9.3 percent share, Motorola stands at 8.4 percent and LG stands at 6.8 percent. 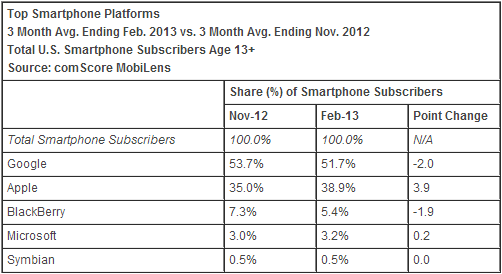 On talking about the smartphone platform market share, Google’s Android ranked as the top smartphone platform with 51.7 percent marketshare, while overall the marketshare was down for second month in a row. Apple’s share increased 3.9 percent points to 38.9 percent. BlackBerry ranked third with 5.4 percent share, followed by Microsoft with 3.2 percent and Symbian stands with mere 0.5 percent market share.