The digital measuring company comScore today released its reports on key trends in the US mobile phone industry during the three month average period ending June 2012. The study which was surveyed more than 30,000 US mobile subscribers and found Samsung be the top handset manufacturer overall with 25.6 percent market share, while Android remains on the top position as mobile operating system, but yes one can’t miss that Apple’s growing faster. 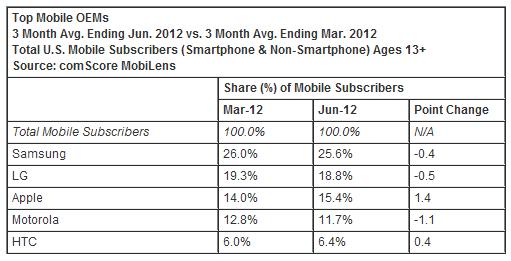 234 million Americans age 13 and older used mobile devices for the three-month average period ending in June. Device manufacturer Samsung ranked as the top OEM with 25.6 percent of US mobile subscribers, followed by LG with 18.8 percent share. Apple continued to gain share in the OEM market, ranking third with 15.4 percent of mobile subscribers (up 1.4 percentage points), followed by Motorola with 11.7 percent and HTC with 6.4 percent (up 0.4 percentage points). 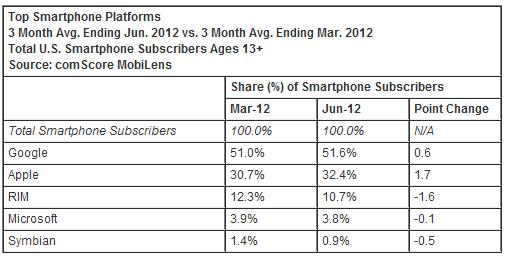 Talking about smartphone platform market share, more than 110 million people in the country owned smartphones during the three months ending in June, up 4 percent as compared to that of March. Google’s Android tops smartphone platform with 51.6 percent, while Apple’s share was 32.4 percent. RIM ranked third with 10.7 percent share, followed by Microsoft (3.8 percent) and Symbian (0.9 percent).