An interesting piece of data revealed today from the recent study done by comScore came to light that nearly 2 in 5 US tablet owners read newspapers and/or magazines on their device in August, with almost 1 in 10 reading publications daily. Study results show that Kindle Fire topped the chart and showed the strongest propensity for reading newspapers and magazines on their device. In August, about 39.2 percent of Kindle Fire users read newspapers, slightly higher than that of Apple’s iPad at 38.3 percent. While, when it came to magazine/periodicals, Kindle Fire showed the highest readership rate at 43.9 percent, followed by iPad users at 40.3 percent. 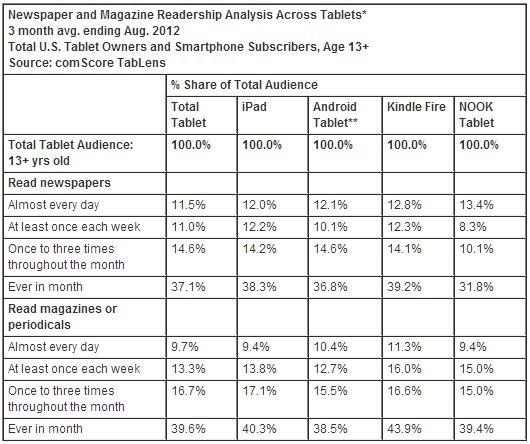 “Tablets are fundamentally redefining how people consume news and information, with the format more conducive to reading longer form content than PCs or smartphones,” Mark Donovan, comScore SVP of Mobile, said in a statement. “In the case of online newspapers, tablets are now driving 7 percent of total page views, an impressive figure considering the relative infancy of the tablet space. Publishers that understand how these devices are shifting consumption dynamics will be best positioned to leverage this platform to not only drive incremental engagement among current subscribers but also attract new readers.”