Google Sites, driven primarily by video viewing at YouTube.com, ranked as the top online video content property in April with 157.7 million unique viewers, followed by Yahoo Sites with 53.6 million, VEVO with 49.5 million, Facebook.com, which is on cloud 9 today with 44.3 million and Microsoft Sites with 42.8 million. 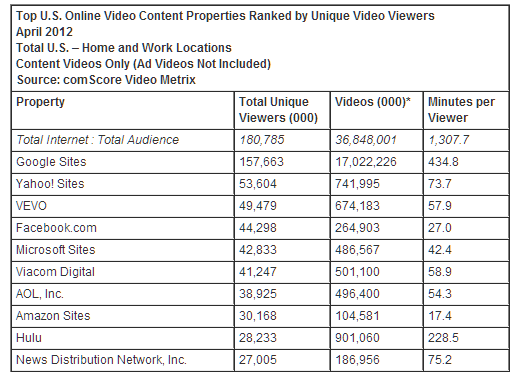 Nearly 37 billion video views occurred during the month, with Google Sites generating the highest number at 17 billion, followed by Hulu with 901 million and Yahoo! Sites with 742 million. The average viewer watched 21.8 hours of online video content, with Google Sites (7.2 hours) and Hulu (3.8 hours) earning the highest average engagement among the top ten properties.