According to the quarterly survey of China Online Video Ads Market 1Q12, Analysys released a reports stating that China online video ads market revenue now hit around 2.1 billion Yuan (around $330 million) in 1Q12, with a year-on-year increasing being of 218.1% and sequential growth rate being 24.7%. 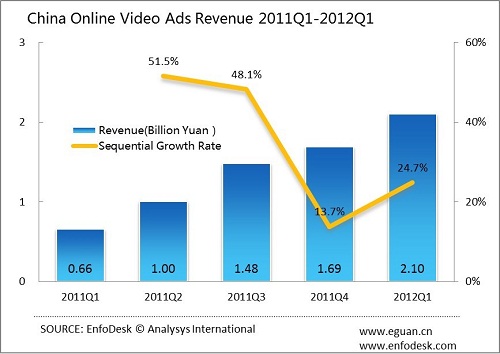 China online video ads market rose 24.7% compared with last quarter in 1Q12, reached 2.1 billion Yuan. Following ups and downs in 2011, online video market came back to rapid growth in 2012. Analysys believed that data concluded from research into market and trade is within acceptable errors. It can reflect the trend and commercial laws accurately.