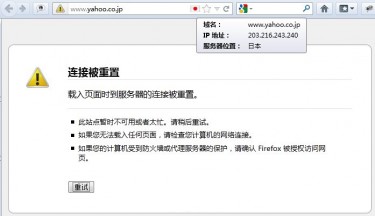 An un-amazing thing happened between June 15 and June 16, last week that Chinese Great Firewall had blocked top domain name registry, co.jp temporarily for more than 30 hours – reported Global Voices (via The Next Web). Surprising is that this is the first time something like this has happened and that too for the top level domain registry.

Yahoo! Japan stated that the block lasted for 1.5 days and there hasn’t been any explanation that why such thing happened, as blocking co.jp not a small thing. Further, a tech blogger name William Long pointed out that site having the extension .com and .jp are the domains that were unaffected although he believed that it was a technical error not more than that.