TRENDING
Navigate
Categorized as
2679
Tagged as
BrandBrand FollowerBrightEdgeGoogleGoogle Plus
Related 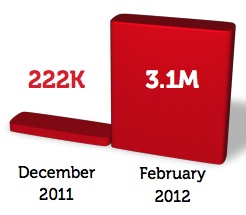 Google+ when comes to engage more users on its network is always ready to do a lot of things – sometimes “just” experiments – and sometimes branding experiments – Brands on Google+ reportedly are seeing tremendous growth in followers numbers – Google+ which was famously chosen by brands as a way to do promotion when its launch – on the whole this is what now accounts for the number of users following the top 100 brands on Google+ has increased 1400 percent, from 220,000 in December to 3.1 million in February, BrightEdge reports.

Noting the circle figures, Coca Cola leaped from 1,800 to 336K, a 187 times increase – similarly Google themselves have nearly 7 million likes on Facebook, but accounts for just 194,000 on their Google+ page – while the majority of top 100 brands that have adopted Facebook pages also having Google+ pages. In fact, the top brand, H&M, has more 462,000 followers than the entire top 100 did in December. The report says most of the growth is happening in the top 10 brands, which have 10 times as many followers as brands 11-100 combined.