HTC last month during Mobile World Congress revealed its new One series, over which the company announced that AT&T will carry an LTE version of HTC One X smartphone, will feature Android 4.0 and LTE. AndroidCentral is reporting that one of its form member name Phonegeek suggesting that what the AT&T One X version with the Snapdragon S4 is capable of.

An AT&T device tester going by the name of Phonegeek has posted some benchmarks of the new phone. The One X outperforms the competition in Vellamo, a browser benchmark developed by Qualcomm. The best advantage it seems to be that the One X will not get the Tegra3 processor in return of AT&T’s LTE network. The phone is expected to make its debut by mid-May. 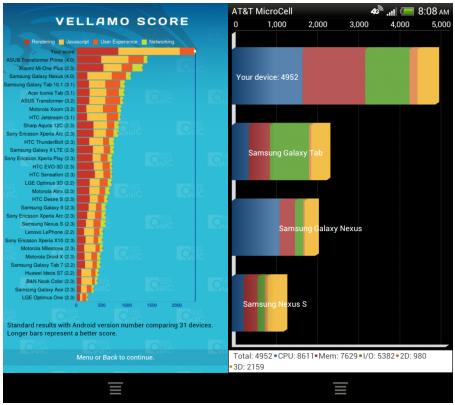 Although the phone is coming with cool specification, which includes with a 4.7-inch, quad-core superphone, Tegra-3 powered will feature Android 4.0, Sense 4.0 with NFC, 32GB of storage onboard, and a 1280 X 720 Super LCD display, an “all-in-device” feature in HTC language, the camera is an 8-megapixel backside illuminated sensor with an f/2.0 lens.