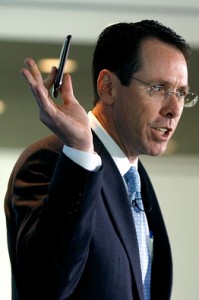 What it would be the “failed” turnover could cost the company as well as the company head – if you have not ever wonder – then here we are at this point to tell what happens in the case of AT&T’s failed takeover of T-Mobile which cost the company about $4.2 billion in breakup fees paid out in cash as well as in spectrum rights, AllThingsD reports.

The $39 billion merger that was collapse turned out to cost company’s CEO Randall Stephenson – a $2.08 million in bonuses – the merger was between the nation’s second largest and fourth largest mobile phone operators reportedly – counting and figuring out the end results of the “not-to” done deal a $2 million pay cut that cost Stephenson’s a total compensation for the year to $22 million.