With the change in shift, certainly the companies around the world has start looking over the other parts of world, mainly Asia, and in such a run, if we talk about world’s largest social network company, Facebook .

According to the data from Socialbrakers latest Facebook’s statistics, Asia has surpassed the numbers of users in Europe. The data revealed that Asia now having more than 242 million registered users, which is a million more than that of Europe, while North America’s figure some 6.5 million users lower.

If we talk about the social giant worldwide users, the number now accounts for 913 million (a big huge number). 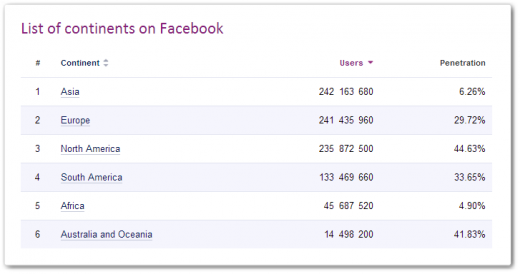