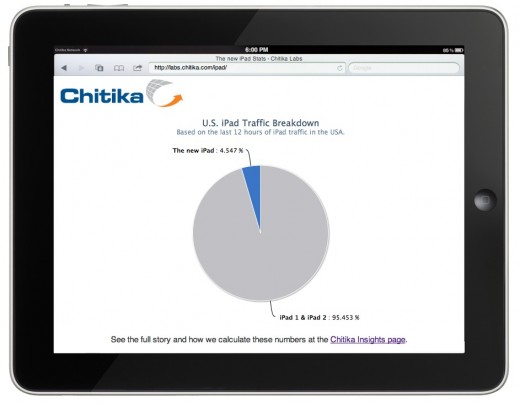 According to the advertising network Chitika, Apple’s new iPad has covered around 5% of the market already and is on the way of climbing at a steady rate. The company is analyzing iPad traffic over its network in 12-hour segments in order to track the adoption of the new iPad. Chitika’s live graph indicated that the new iPad tracker shows that Apple’s new tablet has captured as much as 5.26% of the internet traffic in the last 12 hours.

The chart is updated live and shows the ‘current’ percentage over a rolling twelve-hour average of iPads on the internet in pie-chart form. The network says that it will continue to delve deeper starting tomorrow, Monday the 19th, presenting the results in a state-by-state breakdown as well. It also checks the pixel density of the ad impression, as the new iPad still reports at 1024×768, but shows a detectable increase in density. We are expecting the real “sales numbers” from Apple as it normally share them in the days after launch weekend, so we may get official numbers soon.