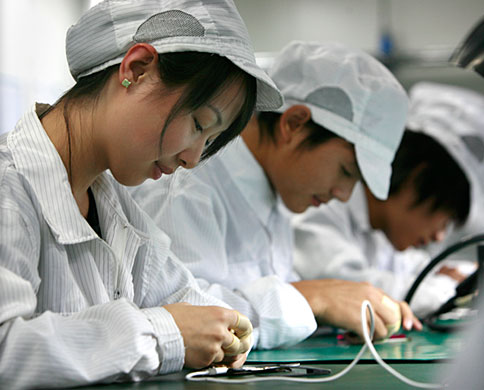 With just a week passed when Apple reported its highest quarterly earnings of record $46.3 billion in revenue, the company is still find itself somewhere in reports of labor abuses among its suppliers. The company employs around 43,000 people in the United States and 20,000 overseas. There are also those employees who works with the company on contract basis like Apple employs an additional 700,000 people who build and assemble iPads, iPhones and other Apple’s products.

The NY Times has documented the company’s current state stating, “In the last decade, Apple has become one of the mightiest, richest and most successful companies in the world, in part by mastering global manufacturing. Apple and its high-technology peers — as well as dozens of other American industries — have achieved a pace of innovation nearly unmatched in modern history.

However, the workers assembling iPhones, iPads and other devices often labor in harsh conditions, according to employees inside those plants, worker advocates and documents published by companies themselves. Problems are as varied as onerous work environments and serious — sometimes deadly — safety problems.”

One former executive described how the company relied upon a Chinese factory to revamp iPhone manufacturing just weeks before the device was due on shelves. Apple had redesigned the iPhone’s screen at the last minute, forcing an assembly line overhaul. New screens began arriving at the plant near midnight. Other pointed that, “going overseas, at this point, is their only option.”

Apple, in its published reports, has said it requires every discovered labor violation to be remedied, and suppliers that refuse are terminated. Privately, however, some former executives concede that finding new suppliers is time-consuming and costly. Foxconn is one of the few manufacturers in the world with the scale to build sufficient numbers of iPhones and iPads. So Apple is “not going to leave Foxconn and they’re not going to leave China,” said Heather White, a research fellow at Harvard and a former member of the Monitoring International Labor Standards committee at the National Academy of Sciences. “There’s a lot of rationalization.”

The way Apple is going through the complaints right now – similarly other companies too reports similar internal pressure. The system is not new but still companies together have to work on this – atleast for the sake of the future, as generating the amazing and awesome gadgets is one thing but on the other hand taking care of labor forces too are very much important.