The iPad maker, Apple which on late January has appealed a Chinese court on last December ruling rejected its ownership of iPad trademark in China. Proview – the company against which the Apple had originally filed a lawsuit over the trademark control issue. But back in December, Apple’s claim was rejected by the Shenzhen Municipal Intermediate People’s Court. 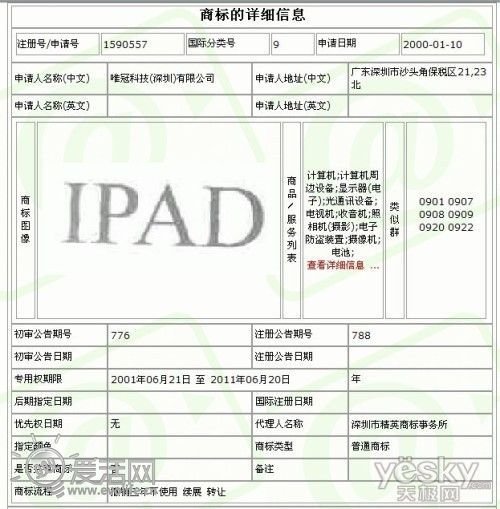 Chinese publication Hebei Youth Daily suggesting that authorities in China have reportedly begin removing Apple iPads from retail store in the country – some local Administrations of Industry and Commerce (AIC) have begun confiscating the product wherever it has been found on sale, in reponse to the ruling against the iPad maker.

Stan Abrams of chinahearsay.com predicted this possibility a few days ago:

What can the AIC do? It can raid premises, seize documents, equipment, products and counterfeit marks, and it can halt activity and lock down businesses. Once AIC makes a decision about infringement, it can order fines (these go to the government, not the trademark owner), revoke business licenses, and mandate a public apology.

Note that an AIC raid is often used by trademark owners as Step 1, with a civil lawsuit as Step 2. It would be interesting to know if Proview and its lawyers filed the AIC application in Beijing before filing the civil suit in Shanghai, and whether they have approached other AICs.

OK, so once again, in addition to the contract action in Guangdong, we have an infringement suit in Shanghai, and a pending AIC application in Beijing. According to the Beijing Evening News, which apparently talked to AIC, the authorities are sitting on this for the time being. Why is this happening?

I can only speculate that it’s political. Look, Beijing AIC can certainly claim that since this case involves a pending civil suit, they feel obligated to step back and wait for a resolution from the court in Guangdong. Maybe.

But AIC could act if it wanted to, and the court action is Guangdong is now an appeal that most folks expect Apple to lose. Proview is the owner of record of the trademark, and the infringement is crystal clear. No reason at all that AIC could not raid all the Apple stores and resellers in Xicheng District and effectively shut down all iPad sales there.

No, really. They could do so tomorrow if the political will was there.

So why are they sitting on this? My guess is that this one is just too high profile, Apple has too much clout (Proview who?), and AIC is worried about blowback. The pending court action is great cover behind which AIC can hide until, hopefully, a settlement is cobbled together by the parties.

There is still not proper information so far that how many stores and AIC groups taking action, but it is also pointed out that some outlets have opted to remove the device from their shelves to prevent political issues with the authorities – overall the whole issue will definitely effect the company as China is a “high potential” region to the company.