Apple filed and claimed patent number 8,482,535 on Tuesday the 9th, essentially patenting a smart iDashboard. Titled ‘Programmable tactile touch screen displays and man-machine interfaces for improved vehicle instrumentation and telematics’, the dashboard is designed to add additional features such as touch screens, laser tracking, voice control, and cameras to the standard dashboard. Accompanied by the patent is a rudimentary drawing of what the first generation might look like, but although the patent has only been out in the open for a short time, critics are already claiming that it will fail. 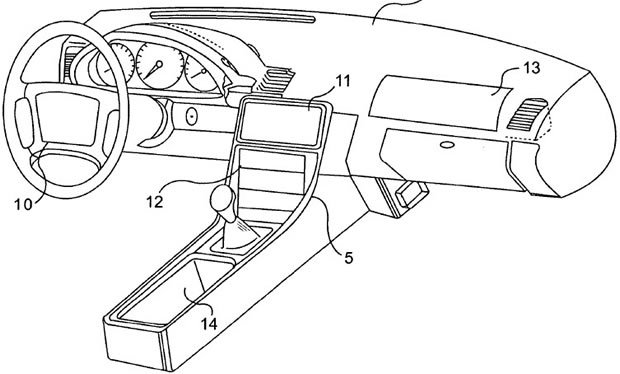 What is the Apple Dashboard?

Not to be confused with the Apple software ‘Dashboard’, the Apple Dashboard is literally made for use inside of a vehicle. While it is most likely to be marketed to car manufacturers, it may also be available as an aftermarket addition for vehicle owners to install themselves. The dashboard swaps out traditional knobs and buttons for a completely touch screen interface with voice controls, motion and light tracking, and camera tracking.

Instead of offering a single smooth surface that could be confusing to owners, the dashboard incorporates a range of edges and ridges, and the final version may even include a few standard buttons and knobs. The dashboard will also come with Siri built in, as well as complete graphic interface. The dashboard was designed by Tim Pryor, who invented the Digital Dash before moving on to Apple to advance his designs.

“This invention seeks to dramatically increase the utility of car informational displays and controls, while at the same time enhancing safety by improving sensory data presentation and ease of interaction with vehicle controls and data sources. The programmable nature of the disclosed devices also creates new methods for how data is delivered and utilized… Because it resembles today’s dashboards, and can be used for the basic control functions of the vehicle, the invention provides not only a potential means of telematic connectivity while driving (e.g. with the internet, cellular telephonic sources or the like), but a much more useful display and control system capable of many more functions–including the primary vehicle control functions, if desired.”  Apple describes their new patent quite well, most likely in an effort to avoid the claims that the patent is ‘too vague’ as was said about the iPad’s ‘rectangle screen’ patent.

Why the Critics Hate it

As exciting as a modernized dashboard is, critics don’t seem to be agreeing. Forbes calls the Apple dashboard ‘clunky’ and ‘inelegant’, citing that Apple is on the way out and that most car dealers are unlikely to use an item that is branded by anyone but themselves. Because Apple is unlikely to give up their trademark branding, the dashboard probably won’t be used in most vehicles.  Other arguments insist that users might find a dashboard without textile controls too confusing, mostly because it requires more attention, and they are more used to knobs and buttons.

While Apple is significantly less popular than they were 2 years ago, car technology is on the way up. In 2012 Apple patented an iPhone remote that can unlock and start up your car, as well as a wireless remote that can interact with your car as well. Toyota has a Qi wireless charging dock that can be used for in-car mobile charging, and there are a variety of smart additions to vehicles that have been cropping up within the last few years. Something like the Apple Dashboard is a natural extension of that technology.

About the Author
Brandy Cross

Brandy Cross is a full time freelance writer specializing in technology, SEO, and games. She writes for The High Tech Society as well as her own blog, and various others around the web.