Newzoo has revealed key insights into mobile gaming in the U.S. market as part of a fresh study of markets in Germany, France, the UK and U.S. The findings states that the number of mobile gamers in the U.S. has grown from 75 million to 101 million, or 69% all which plays on smartphones and 21% on tablets. The largest growth can be found in the conversion to paying players. The number of paying players has grown 35% to 37 million Americans, or 36% of all mobile gamers. This shows that mobile gaming is set for another year of double-digit revenue growth in the U.S.

These insights are based on a fresh round of National Gamers Surveys That Involved 17.000 respondent, in combination with monthly iOS and Android game revenue and download data of the top 200 Grossing games, a service provided by Newzoo in cooperation with Distimo. Of all American mobile gamers, 19 million play on an iPhone, which is 28% of all smartphone gamers. An additional 18 million plays games on an iPod Touch. In the tablet gaming space, the iPad is dominant with a share of 60%, or 12.7 million Americans. 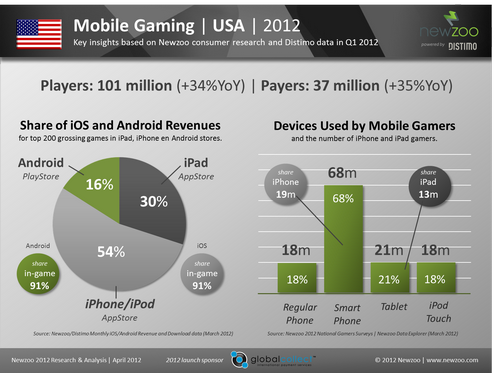 Apple’s position is strongest When It Comes to revenues generated. In March 2012, all IOS devices combined earned 84% of mobile revenues generated or generated by the top 200 Grossing games in the three stores combined: iPad, iPhone / iPod App Store and Google Play Store. For Both Android and IOS devices, the Majority of money is not spent on downloading games but the within-games: an astonishing 91% for Android and 91% for iOS games. This share is Significantly higher in the U.S. than in Germany and France, where figures are Between 73% and 87%. The comparison does not include advertising revenues generated.

Newzoo’s CEO Peter Warman: “When analyzing Apple’s successful monetization, there is one dominant factor outside of differences in audience demographics and preferences: Apple requires users to connect Their credit card information directly to Their account, Galanthus creating a seamless purchase experience. Hardly can I imagine any other company in the world that would be bootable to get away with this, Including Google and Microsoft. Facebook can come a long way, but Amazon Clearly has the best chance and is proving this as we speak. ”

Americans have massively switched to playing games on smartphones and tablets, with only 19% Still Using a regular phone for playing games. The difference with mobile players in France for instance is huge, with 34% Still Using Their regular phone to play. Both the U.S. and the UK have a similar share of mobile gamers who use a smartphone to play games (69% and 75% respectively). But, in the U.S., Android takes 16% of the revenues, Whereas in the UK this figure is the lowest of all countries Involved at only 6%. This big difference can be explained by the huge uptake or Kindle Fires in the U.S. with 17.4 million active users.