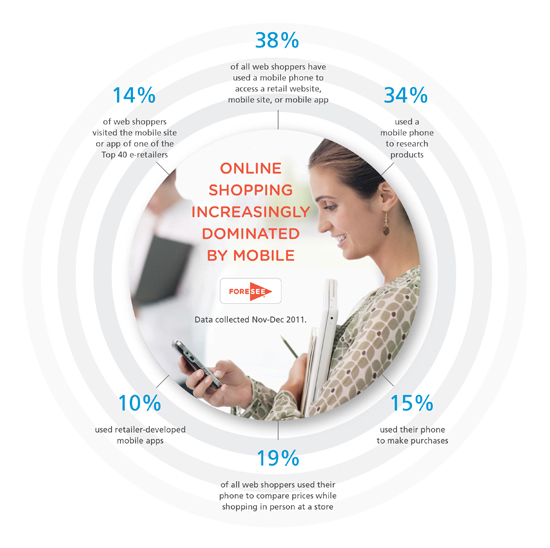 As per research, shoppers are generally more satisfied with traditional websites than they are with their mobile counterparts. The average mobile satisfaction score for the 16 retailers measured in the report is 76, compared to 79 for the same companies’ websites. Apple and Amazon, which scored 85 and 84, respectively, on the 100-point scale study, topped the list by a wide margin.

However, a few companies had comparable performance on mobile and web: Apple (a standout with a mobile score two points higher than its web score), Toys “R” Us, Best Buy, Staples, Netflix, Dell, and Blockbuster.  Others re 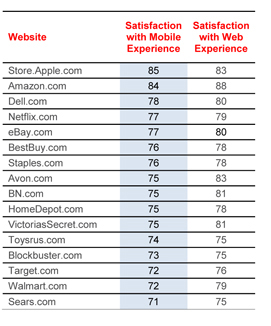 veal large gaps between the website and the mobile experience, including Avon (satisfaction 8 points lower on mobile) and Walmart (7 points lower).

In addition, the ForeSee study shows that satisfaction with the mobile experience has a significant cross-channel impact. Mobile shoppers who are highly satisfied with their mobile experience are 54% more likely to consider the company next time they want to make a similar purchase, and twice as likely to buy from the retailer’s mobile channel again.

The research and the final results are based on mobile score on more than 3,000 responses collected from visitors to the mobile sites and apps of the top 40 e-retails websites according to sales revenue. Data for online shoppers is based on more than 8,500 responses from visitors to the traditional websites of these retailers. Survey responses were collected via FGI Research’s Smart Panel.

ForeSee is an international customer experience analytics firm based in Ann Arbor, Michigan. Using the methodology of the American Customer Satisfaction Index (ACSI) which was founded at the University of Michigan, ForeSee continuously measures satisfaction across customer touch points and delivers critical insights on where to prioritize improvements for maximum impact. ForeSee’s original research on retail, e-government, financial services, and other industries is regularly cited in major news and media outlets and in academic and analyst research.