With the ongoing tiff between iPad maker Apple and Proview over the iPad trademark issue, Amazon China and Suning have become the first online retailers to remove the iPad from their catalogues in China – on the context of trademark fall-out – we reported yesterday that Apple could face a complete ban on its import and export of its iPad tablet in China after a Chinese technology firm Proview claims to own the ‘iPad’ trademark said it will seek a ban on shipments of the device in the country.

First to be reported by the Chinese site QQ Tech has two screenshots of an iPad 2 but with the consumers unable to buy them. The news is definitely brings a lot of worry for the Cupertino-based firm as for the Apple China is one of the most projected potential market.

Noting further on this, Amazon has removed the price and ‘buy’ button, while on Suning the checkout icon is greyed-out with the price was missing. Penn Olson verifies that a search instead brings up a series of accessories for the device. The NY Times also reported that Xuzhou, China’s second city with 1.8 million populations — has put iPads under “temporary impoundment.” 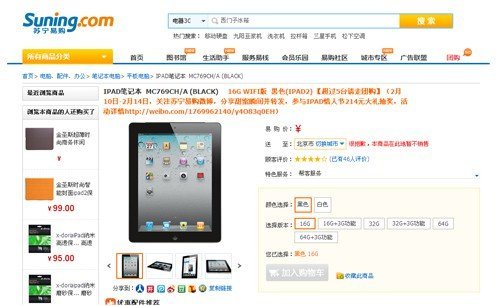 Both Suning and Amazon china holds a smaller market area in the B2C e-commerce space in China. Alibaba’s Tmall.com and 360buy – the Chinese market leaders still reportedly have iPads for sales along with Dangdang.