We are moving in the fast phase world where everything changes in a glimpse of seconds, so as same as that for CSS3. CSS3 is here, it is fun, and allows us to evolve the look of the web as we go. Since now the majority of browsers support the features CSS3 offers, it is important for developers and programmers to move forward and bring the change. Features like gradients, drop shadows, rounded corners, animations, and opacity are giving us the promise of more fun. Below are the 26 CSS3 tutorial prepared fresh, useful and instructive:

This is a not a tutorial but you can play with the plugin, while CSS3 allows us to rotate letters; it is quite complicated to arrange each letter along a curved path. Arctext.js is a query plugin that lets you do exactly that. Based on Lettering.js, it calculates the right rotation of each letter and distributes the letters equally across the imaginary arc of the given radius.

Everything You Need To Know About CSS3 Text Shadow Effects 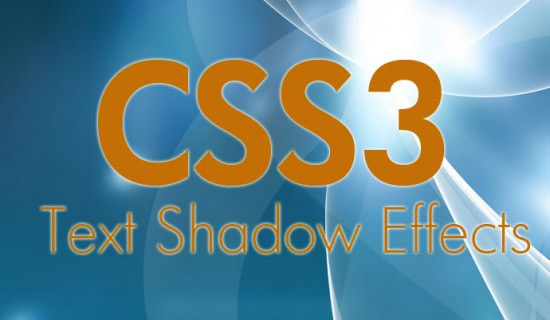 In this tutorial with CSS3, a whole host of text shadow effects are available for us to play with. In this article, we’ll cover some of the effects you can make with relatively little CSS code. 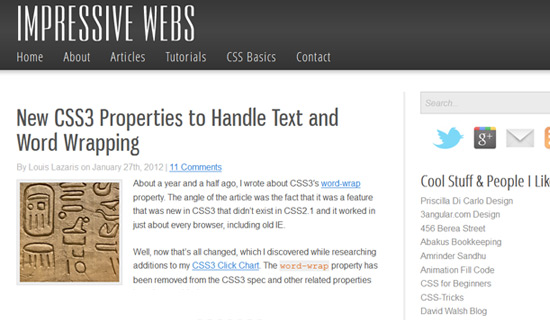 The word-wrap property has been removed from the CSS3 spec but other related properties have been added. Find out what they are and how to use them.

How To Add Text Gradients With CSS

In this tutorial we are going to look at some of the new CSS3 features for dealing with text colours. If you have used CSS background gradients before then you will know how you can add gradients to the background of elements, but it’s not as easy to change the colour of text to have a gradient just by using CSS.

How to Create a CSS3 Dropdown Menu 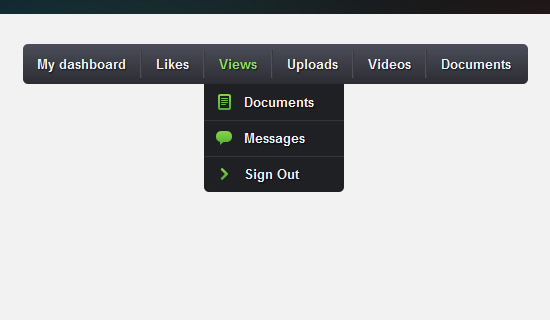 In this tutorial we will code in pure CSS3 the Navigation Menu. 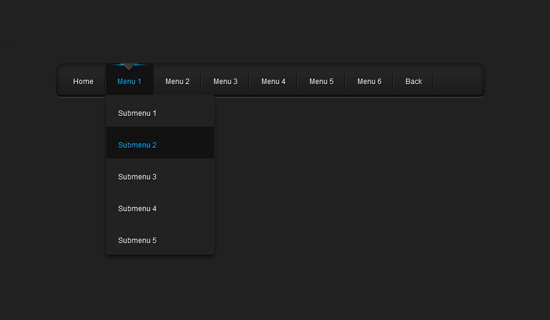 In this tutorial you will learn how to use we start with the HTML. Here is the html code of our menu and CSS styles of our LavaLamp menu. You probably have already seen animated menus with the LavaLamp effect. 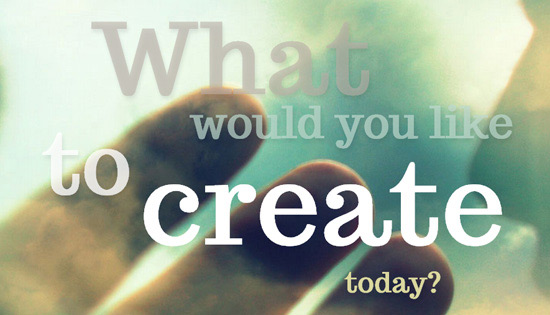 This tutorial is we will create another typography effect. You will be “exchanging” certain words of that sentence using CSS animations. 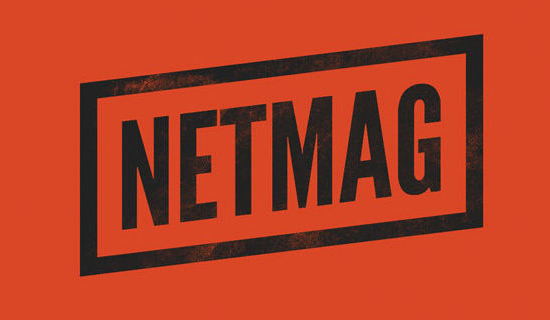 In this tutorial we’ll walk through texturising type from scratch – beginning with basic HTML and CSS, then creating a semi-transparent texture in Photoshop and implementing it on some headline text within a web page. We’ll finish it off by adding some extra CSS and JavaScript love. 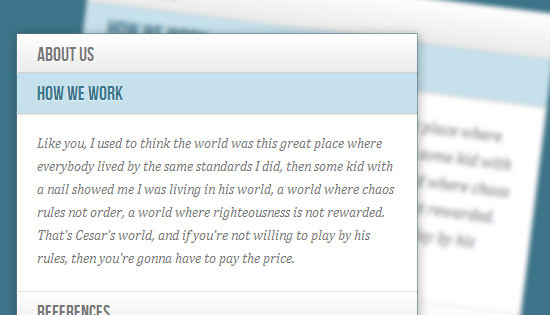 In this tutorial used to Using hidden inputs and labels, we will create an accordion that will animate the content areas on opening and closing. 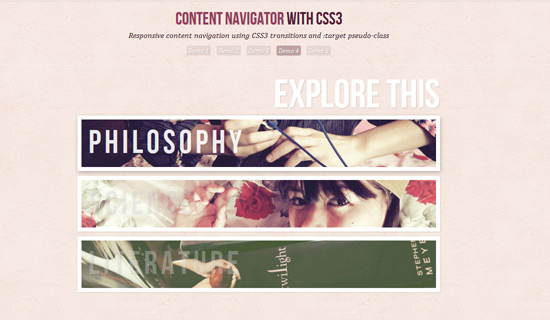 In this tutorial show you how to create a content navigator with CSS only. The idea is to have several slides or content layers that we’ll show or hide using the: target pseudo-class. With CSS transitions we can make the slides appear in a fancy way.

In this article you’ll learn how to build some new CSS3 & jQuery tabs inspired by Google Play‘s design. 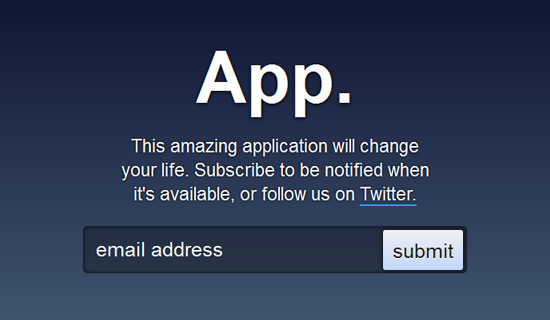 In this tutorial, you will learn how to build a teaser page using just CSS, no images or even a Photoshop design. Many websites and upcoming apps gain great publicity from teaser pages, so this is a useful concept to add to your toolkit. Use it for any app or website that’s getting ready to launch.

How to Create a Content Accordion in Pure CSS3 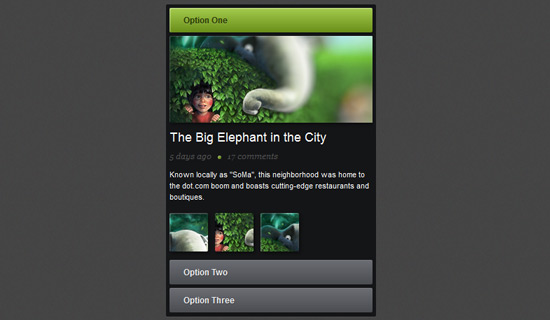 In this tutorial we will learn how to create a pure CSS3 content accordion. This will work on all browsers and devices that support the: target selector. 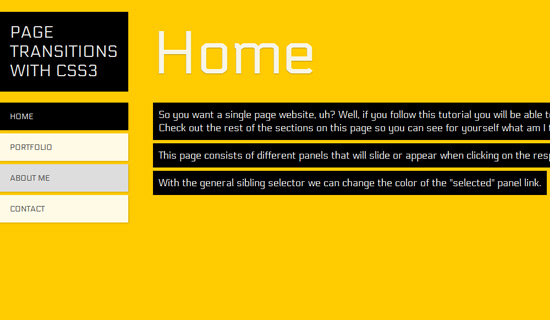 In the last few years, we have seen a lot of single page websites lying around the internet, most of them using JavaScript for some transitions effect. In this tutorial, you will learn how you can have your own, but instead will be using CSS Transitions and the: target property to do all the magic. 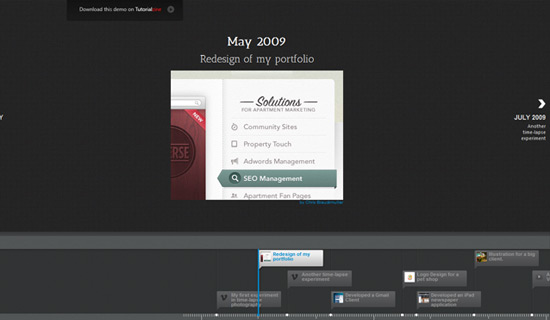 This is not a tutorial but you can play with the plugin, Timeline is a query plugin specialized in showing a chronological series of events. You can embed all kinds of media including tweets, videos and maps, and associate them with a date. With some design tweaks, this will make it perfect for a portfolio in which you showcase your work and interests. 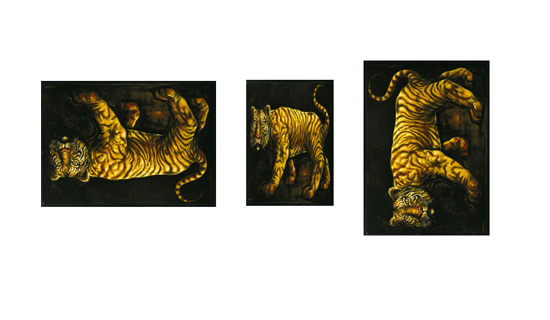 In this tutorial we will go through the basics of rotating in 3 dimensions and will combine these transforms with the scale and translate transforms for more complex results. We will also add a basic level of interaction to animate the effects as the user interacts with the page. 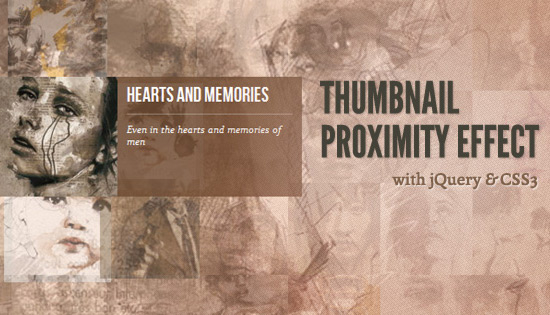 In this tutorial show you how to create a neat thumbnail proximity effect with jQuery. The idea is to scale thumbnails when hovering over them and also scale their neighbouring thumbnails proportionally to their distance. We’ll also make a description appear.

In this a product page is any page on your website that showcases a product. It has to describe its features, give some screenshots, and be descriptive. Naturally, this is the place where you build up the visitor’s interest towards your product. 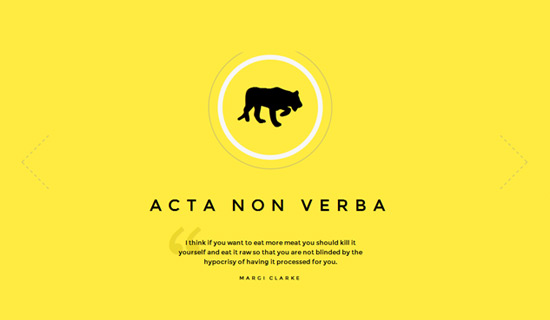 In this tutorial we’ll create a fullscreen slideshow with a twist: we’ll cut the current slide open in order to reveal the next or previous slide. Using different data-attributes, we’ll define the type, rotation angle and scale of a slide’s parts, giving us the possibility to create unique effects of each slide transition.

Create the Illusion of Stacked Elements with CSS3 Pseudo-Elements 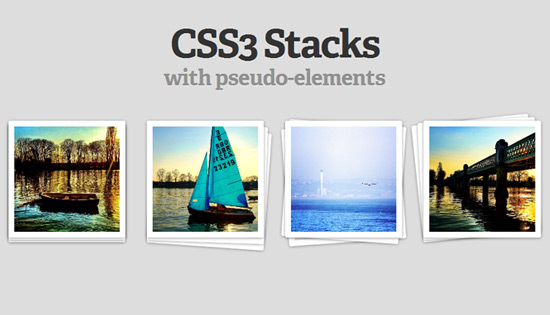 In this tutorial you’re familiar with the use of the: before and: after pseudo-elements in order to do some interesting effects with CSS. You will show how you can create a simple ‘stacked’ look to some images.

Login and Registration Form with HTML5 and CSS3 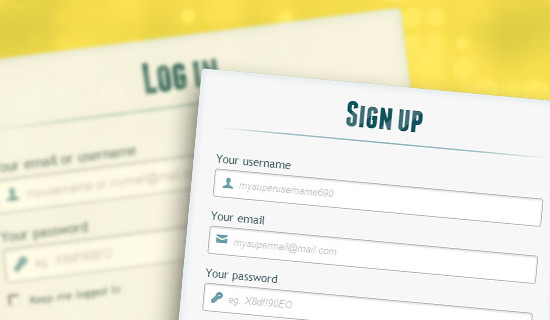 In this tutorial we are going to create two HTML5 forms that will switch between login and registration using the CSS3 pseudo class: target. We will style it using CSS3 and an icon font. The idea behind this demo is to show the user the login form and provide a link to “switch” to the registration form.

How to Create an Video Player in jQuery, HTML5 & CSS3

In this tutorial we will code an Video Player from Impressionist UI, We will code it with CSS3 for the styling and the “MediaElement.js” for the functionality. MediaElement.js is a HTML5 audio and video player that also works for older browsers using Flash and Silverlight to mimic the HTML5 MediaElement API. 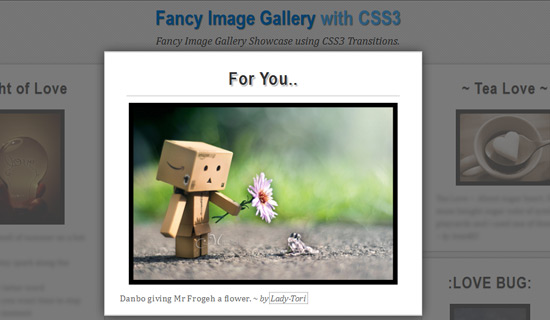 In this tutorial create a fancy image gallery with CSS3 transitions. The techniques used are mainly CSS3 transitions combined with CSS: hover pseudo-class. Of course, other CSS properties are still used for styling purpose! 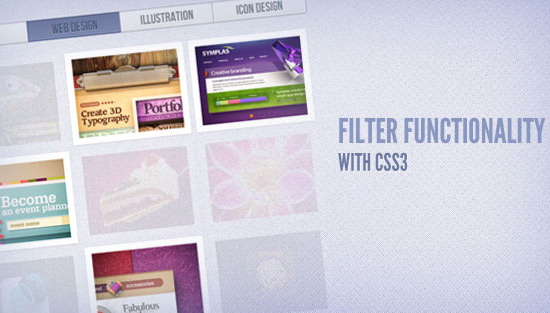 Using the general sibling combinatory and the: checked pseudo-class, we can toggle states of other elements by checking a checkbox or a radio button. In this tutorial we will be exploring those CSS3 properties by creating a experimental portfolio filter that will toggle the states of items of a specific type. 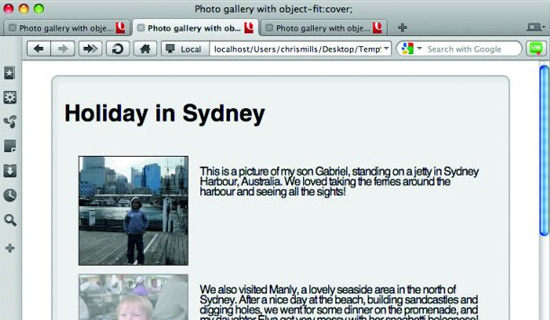 This article making media display consistently on your site can be a problem, especially with multiple content authors. Opera’s Chris Mills shows you how object-fit and object-position can solve it. 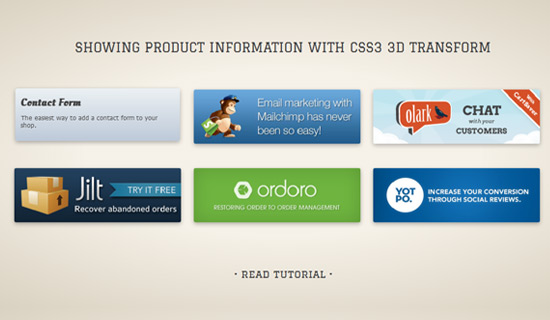 In this tutorial you will learn how to show our product information with cube style using CSS3 3D Transform.