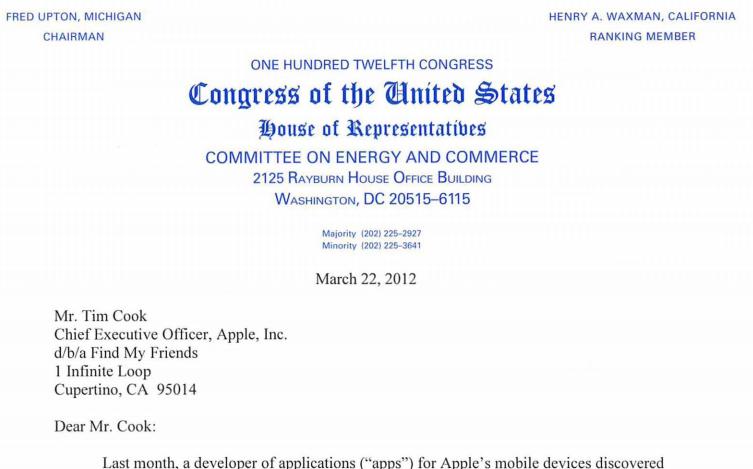 Over the issue of not analyzing Apple’s consumer privacy protection policy by Congress, the Energy and Commerce Committee sent a letter last week to Apple’s CEO Tim Cook stating that to send a company representative to Washington so as being able to formally brief it on how the company is protecting the person information of mobile device users.

Representatives Henry Waxman (D-CA) and Fred Upton (R-MI) sent letters to Apple and 33 iOS app developers today, requesting detailed information about their data collection practices. The committee has expanded its investigation to 34 developers, including Twitter, Turntable, Foursquare, Facebook, and Path, and says it wants “to better understand what, if any, information these particular apps gather, what they do with it, and what notice they provide to app users.”

The letter asked the questions says: how many times the developer’s app has been downloaded, when and how its privacy policy was administered, whether the app transmitted or stored address book or other information from users, how notices about collection and use of user data are transmitted asking the recipients to respond by April 12th.