Twitter today announced a whole new set of changes coming in version 1.1 of the API. The company has unveiled that from now user caps for third-party Twitter clients, means developers who create apps that perform traditional third party Twitter client functions got an upper limit of 100,000 users total before the developers must get permissions to work with Twitter directly. 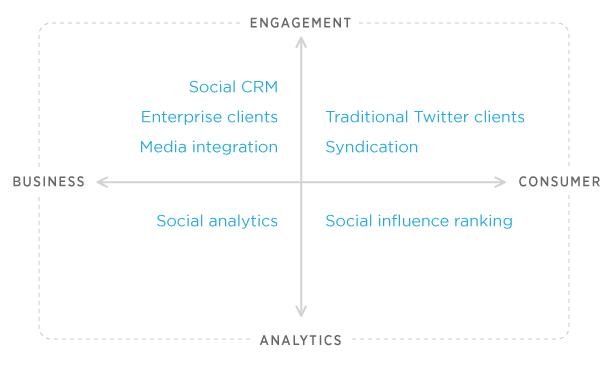 In order to give better idea, Twitter presented a “quadrant” representing types of apps, and saying it preferred that developers create analytics apps, Social CRM apps, and other types of essentially non-consumer-facing apps although Twitter again said that the developers “should not build client apps that mimic or reproduce the mainstream Twitter consumer client experience.”

Twitter also limited the number of API calls that can be made in an hour time while hardware manufacturers who ship pre-installed Twitter apps on devices will need to get those apps certified now. Further, every app accessing Twitter’s API must be authenticated and Twitter will no longer issue “Display Guidelines,” but instead give developers “Display Requirements.”