Twitter has updated both of its iPhone and Android apps, bringing back high-demand features, including the swipe shortcut, and even introduce new design and functionality improvements – the biggest additions is the re-introduction of Tweetie’s swipe actions, allowing users to quickly perform several Twitter functions after a swipe on a Tweet.

The Swipe gestures will function in both apps allowing you to Swipe a Tweet in your home timeline to reply to, retweet, favourite or share it, or even view the Twitter user’s profile, without leaving your timeline. In the same tone, another addition for both the apps – “Find Friends” – the notification will help you more explicitly send the messages the fact that when you upload your contact’s phone numbers and email addresses – results in helping you to find which of your friend is on Twitter. 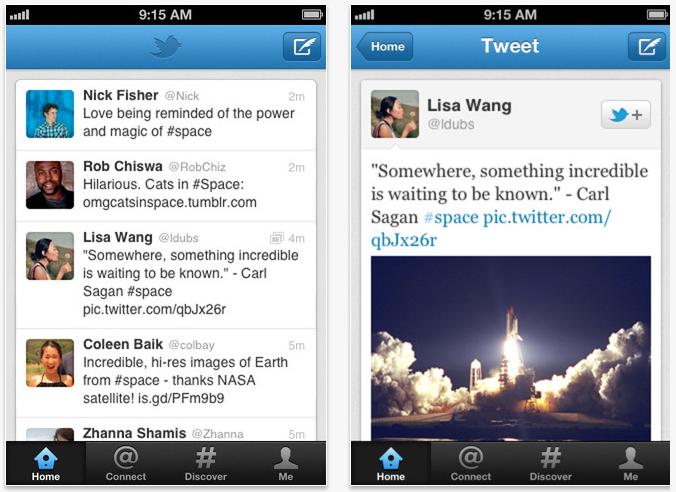 There are also some updates that are exclusive to each version of the app. The iPhone version has returned the ability to copy and paste the text of Tweets, something that many users were looking out for – From now on you can also use the Share feature to tweet, copy, mail or read a Tweet later using your preferred service – The feature can also be activated by pressing and holding on a Tweet.

As far as the Android version is concerned, the Twitter for Android is now optimized to run on Android devices running Ice Cream Sandwich, as well as on Kindle Fire, which is available already through Amazon Appstore and the Barnes and Noble NOOK Color and NOOK Tablet, available starting from February 23 through Barnes & Noble NOOK Store.