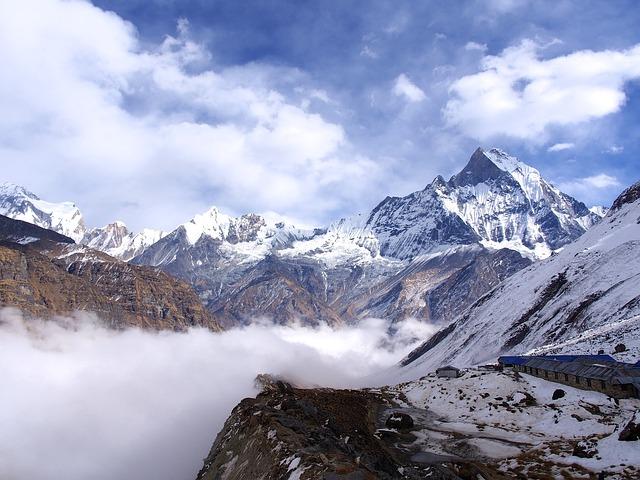 Ironically, many people suffer from an unexplainable fear of heights, but that doesn’t stop anyone to build things on top of mountains or on the sides of cliffs. Those that are a little cautious might consider avoiding these buildings.

These impressive caves built at 50 metres of the ground were once the home of Mustang, a flourishing civilization of artists, scholars and excellent diggers. In Nepal, very close to the Himalayas, more than 10.000 caves having more than eight or nine stories high wait for tourists to grab their mountain gear and escaladed the fragile rock.

Along the way, skeletons, ancient texts and paintings with Buddha uncover their secrets of why they’ve been built. Also, here were discovered the manuscripts from Bon, a Tibetan religion that existed long before Buddhism.

Have you ever wondered how Chinese built the 16 metres Buddha on the side of a mountain? Well, if that’s impressive, wait to see the three Buddha’s statues carved 30 metres above the ground. The Maijishan grottoes in China are even more impressive than that. The actual sandstone mountain has 194 caves with more than 7.000 astonishing art pieces and more than 1.000 sq metres of murals.

The wide network of wooden stairs and balconies has been replaced with metal and now it’s safer to visit the caves that tell the story of 12 dynasties. Many caves remain unexplored, hiding unknown treasures and many statues preserve their original paintwork.

The Chapel of Saint Michel

Built in 962, the Chapel of Saint Michel d’ Aiguilhe was originally a sacred placed used by the Romans dedicated to Mercury. Later, Christians built here a chapel dedicated to St. Michel. Sitting 85 metres above the ground, the chapel seems to be sprouted by the volcanic rock underneath it.

This small chapel of Aiguilhe was built to remember the return of St. Michel from pilgrimage to Saint James and soon became very famous among those that travel on their own. Being the starting point for the route to Santiago de Compostela, people climb 268 steps only to have their walking stick blessed. It’s also thought that in 1429, Joan of Arc’s mother came to pray.

The Coffins of Sichuan

Back to China that has many spectacular things, but by far this is the morbid. Chinese people, like Egyptians, love to honour their dead and that’s why they’ve hanged dozens of coffins into the mountains. Some of the coffins can be found in dug caves, where others are placed on beams of wood fixated into the cliffs.

It’s thought that an ethnic group named Bo ruled the area until 17th century when they were brutally killed by the Imperial Army of the Ming’s Dynasty. Hanging at a distance of 10 to 130 meters above the ground and weighing around 200 kilograms, the way that these resting places got there remains a mystery. It’s believed by some that the Bo lowered them with ropes from above.

The tunnel was built by the locals of the Guoliang village, located in Taihang Mountains, with the purpose of connecting the small village with the rest of the world. Since the government refused the villagers the luxury of an easier access, they decided to make it with their own hands. And so the adventure began. About thirteen villagers worked tirelessly for five years to carve a road of 1.2 kilometres into the rock and a ledge to protect them from falling.

Of course, the road had its side effect. Now, villagers make a good income because their small village is now a tourist destination. For those that decide to visit this stunning area, the adventure begins right at the tunnel, where the uneven carved road can make any driver sweat a little. A spiral staircase located on one of the mountains, climbs about 90 metres and when approaches to the top the wind shakes it back and forth rising any tourist’s adrenaline. Before climbing the staircase, you should know that there is an age limit, no person over 60 is allowed and you should sign a declaration of good health.

About the Author
Andreea Neagu

Andreea Neagu is a long time blogger, passionate about travelling and writing. She also loves anything related to business and technology and she runs a travel blog and website where she offers writing services and promotes authors.