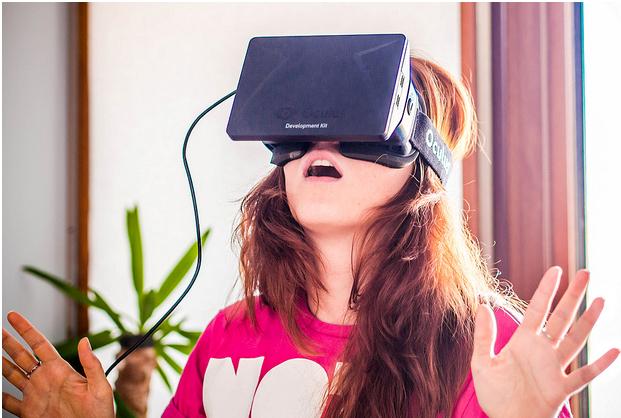 Gaming has already come a long way. It has done so in a seemingly small period of time. It was not that long ago that the concept of Mario moving along platforms was revolutionary. The very first games such as Pong were not that much further back. To think that video games now look as realistic as movies is unfathomable. When you consider that gamers now connect across the internet, it’s incredible how far we’ve come.

The biggest shift in gaming will come through virtual reality. It is a concept that has been talked about for years, decades even. The technology is now just around the corner. Where previously it was too expensive to develop, virtual reality is now an affordable luxury. In 2015 we will see the introduction of the Oculus Rift headset – costing less than $100. It is the virtual reality technology we dreamed about. It fits around your head, offering you a huge range of virtual reality vision.

It will work with hundreds of games across a number of platforms. The headset will allow you to become part of the game. You will be walking and interacting within the game itself. You will feel every little movement and sense every change in the environment. It will block out the real world, allowing you to become completely immersed. The Oculus Rift headset is just the start. More like it will soon enter the market and it won’t take long to develop.

On many consoles, this already exists. Wii, Xbox and Playstation all have their own secondary screens. This is a tablet that holds additional information and controls. For example, you could access the gaming world map or your inventory. They are touch controlled and can sit on your lap while you play. It means you can have seamless integration and can access functions without interrupting gameplay. Previously, you’d have to call up the map through the menu screen. Now, you can just have it next to you the whole time.

Although this technology does exist, none of the major players have taken full advantage just yet. It will slowly become an essential part of all games and consoles. We will truly begin to see its functionality over the next few years. In some cases, the secondary screen will come as standard with the console. In others, there may be an app to download onto existing tablets.

For the serious gamer, this is already standard procedure. You can now buy PCs and laptops specifically for gaming. They come complete with high processing power and more powerful graphics cards. They were originally only for the elite gamer. However, they are slowly becoming more and more accessible. This is thanks to the slow reduction in price and the introduction of gaming laptops. You can see a range of these gaming computers at www.chillblast.com.

Building games is becoming an easier and faster process. This is particularly true in the mobile app world. Mobile gaming may soon overtake consoles. More and more games are appearing on the appstore and android market that have been built independently. This will only increase with time. Some software now exists that lets people build their own games. It requires much less coding ability. It will mean the market will soon be flooded with thousands more games. Of course, this is not necessarily a good thing. However, the very best games will rise to the top. Anyone with a great idea could potentially create the world’s next best game.

Not dissimilar to virtual reality, augmented reality technology will create a more immersive experience. The technology already exists in the form of Google Glass and some mobile apps. Augmented reality means adding value and information to the world around us. Google Glass and some apps, for example, will show us where services are on the high street. They do this as we look at them directly. This technology will slowly adapt into video games. Google Glass for example, could include a world map or text information while you play. The possibilities are only just being tested here.

Gaming is still a costly pastime but it will become more affordable. Playing games will soon become like listening to music on Spotify. It will be similar to watching movies on Netflix. You will simply load up a cloud service and have access to hundreds of games. It will inevitably throw up the debate of ownership. Many love the feeling of building up a collection of physical games. However, there is no argument when it comes to choice and accessibility.

Cloud gaming means that your games can be accessed at home, or in the backseat of the car. You can play one game at home, and continue where you left off on your phone at work. This seamless cloud gaming will change how we play games.

As with any future technology, we slowly drip test the ideas. They are then moulded and users find the best ways to harness them. We don’t yet know how virtual reality will change our gaming experience. But, we know that the technology is just around the corner. It’s an exciting time for gaming fans.

Thanks to Sergey Galyonkin for the image.