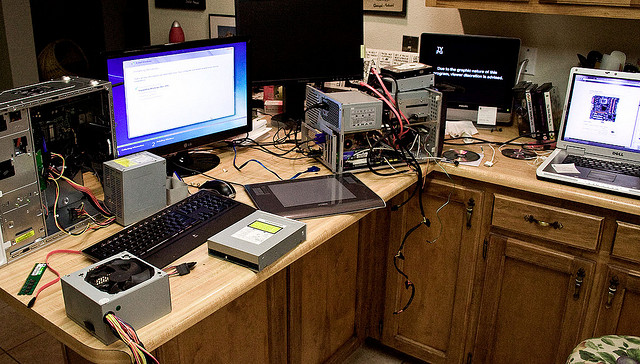 Touch screen monitors have become common sights, from supermarket check outs to smart phones and control systems. They may replace keyboards and mice on personal computers. Three of the main touch screen technologies are: resistive, capacitative and surface acoustic wave.

When it comes to the latest electronic gadgets, touch technology has been taken for granted for over a decade. Physical buttons are so 1990s, except for traditionalist diehards. First, a small stylus tapped away at a screen to find information. This was followed by everyone using their fingers to pinch and wipe across screens. Today, the technology is taken for granted by a general public that is looking for the next most beautiful smart phone model. But it’s not a new invention. The first touch screens date from the 1970s and were used in scientific research. The first consumer computers and later, cars, adopted them in the 1980s.

The resistive system is the oldest touch technology. It consists of a glass panel with two layers; one is a resistive plastic material, the other a conductive metal, separated by a few tenths of a millimeter. When the screen is touched by a user, the layers come into contact and create and electric signal. Air in the gap refracts light and distorts visual images. Only 75 percent of the light reverts to the user.

A capacitative system consists of a layer made of rare earth compounds such as indium tin oxide under the glass screen that stores electric charge. It is used in smart phones and tablets. The charge changes when the user touches the screen and the information is processed by software. This technology does not distort light as much as the resistive technology. But it creates an electromagnetic field that is both detectable and insecure and interferes with other equipment.

Surface acoustic waves occur in nature as ripples on water or Rayleigh waves during an earthquake. Raleigh waves travel along the Earth’s surface and cause massive damage to buildings. Touch screen technology employs user friendly surface acoustic wave. Piezoelectric transducers two emitters and two receivers– are placed on the corners of the monitor screen. These ceramic materials emit electricity in response to pressure and do the reverse, create a mechanical movement in response to an electric current. When a device is switched on, the emitters move to emit ultrasound waves. These travel along the glass surface to the transducers. Reflectors along the edge of the glass bounce signals from one transducer to the other. The signal changes when the screen is touched and is processed by the software into information. There are no metallic layers, so 100 percent of the light is transmitted, producing a perfect image.

It is unlikely that push buttons, keyboards and mice will ever disappear entirely from electronic gadgets. They give a feeling of traditional comfort. However, touch interfaces are the future. The benign surface acoustic wave that has been a common sight as ripples on a pond or during destructive earthquakes is pointing the way.