According to the latest research from Strategy Analytics, the global tablet shipments reached 25 million units in the third quarter of 2012. The Cupertino-based giant iOS had slipped to 57 percent global market share, which gives Android a clear cut chance to capture a record 41 percent market share. Except this, the global tablet shipments grew just 43 percent annually in Q3 2012, compared with 289 percent annually in Q2 2011. 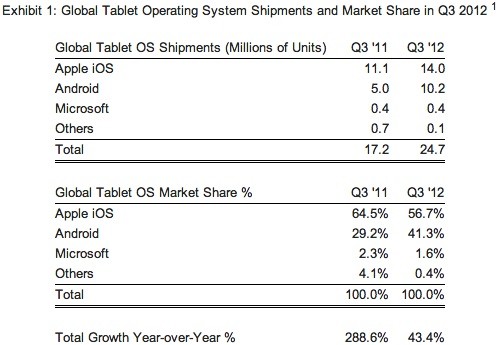 Neil Mawston, Executive Director at Strategy Analytics, added, “Android captured a record 41 percent share of global tablet shipments in Q3 2012, jumping from 29 percent a year earlier. Global Android tablet shipments doubled annually to 10.2 million units. No single Android vendor comes close to Apple in volume terms at the moment, but the collective weight of dozens of hardware partners, such as Asus, Samsung and Nook, is helping Google’s Android platform to register a growing presence in tablets.”