Stop Online Piracy Act (SOPA) which saw a huge blackout day last month by many of the technology companies – including BoingBoing, Wikipedia, Reddit, I Can Has CheezeBurger, WordPress, Mozilla, TwitPic, Minecraft and many others. Its author again in the will to sponsor another bill named the “Protecting Children From Internet Pornographers Act of 2011” (H.R. 1981).

SOPA author Lamar Smith is sponsoring a bill named the “Protecting Children From Internet Pornographers Act of 2011″ (H.R. 1981) – the bill is not a new one but it has managed to slip by relatively unnoticed as of now – the bill would alter US code Chapter 18 section 2703 “Required Disclosure of Customer Communications or Records” which states that all Internet service providers would need to store your IP address for at least 12 months period – along in the sigh of any highly sensitive personal information data. 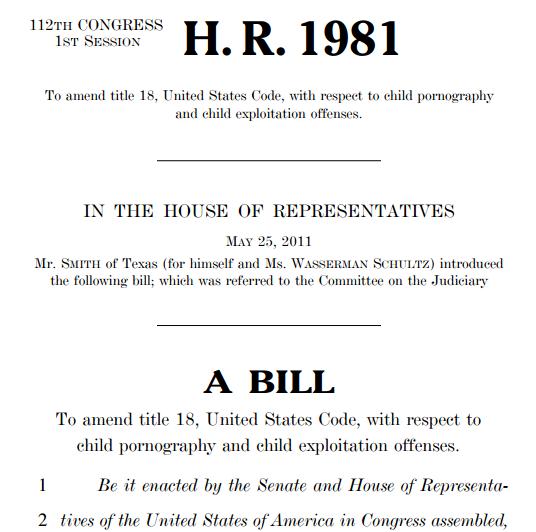 The bill was submitted last year and now in the position to grab attention not only because it is resulting into the constitutional privacy potential breach, but also due to the existence of C-30, Canadian headlines – the Bill C-30 (“Protecting Children from Internet Predators Act”) which was introduced by Vic Toews, Public Safety Minister extends the currently unlawful personal data archiving to mobile carriers.

Ontario Privacy Commissioner Ann Cavoukian called the Canadian bill “disingenuous,” in a recent interview, referring to its alleged focus on child pornography, in the meanwhile, if we think and see the similar comments can easily be applied to the virtually identical H.R. 1981 in the US – well one can now just wait and watch and see how long it will be before one of these bills comes into existence.