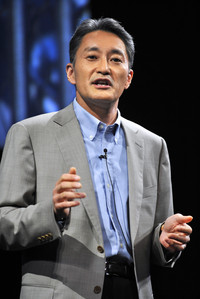 Sony’s incoming CEO Kazuo Hirai which earlier said, “There’s no area that we are leaving as a sacred area,” and reportedly seen extending PlayStation strategies for the company in order to re-shape Sony by linking together both hardware and software through internet (online) networks – latest to add – Hirai signalled his determination by keeping direct charge of company’s TV business division to himself. The maker of Bravia televisions and Vaio laptops expects a 220 billion yen ($2.7 billion) net loss for the year to this month, a fourth straight year of losses.

Sony earlier received a BBB+ long-term debt rating from Standard and Poor, citing a warning that it may further drop the ratings to further extent unless and until if the Japanese consumer electronics giant shows it can achieve relevant and significant turnaround in profitability.

Hirari earlier also discusses his four-point master plan for saving the troubled company. The company posted an operating loss of $1.2 billion and net loss of $2 billion on revenue of $23.37 billion. Sales were 1,822.9 billion yen (USD $23,370 million). The Japanese electronics giant recently announced that it has named former president of its Consumer Products and Services Group Kazuo Hirai as president and CEO, replacing Howard Stringer.