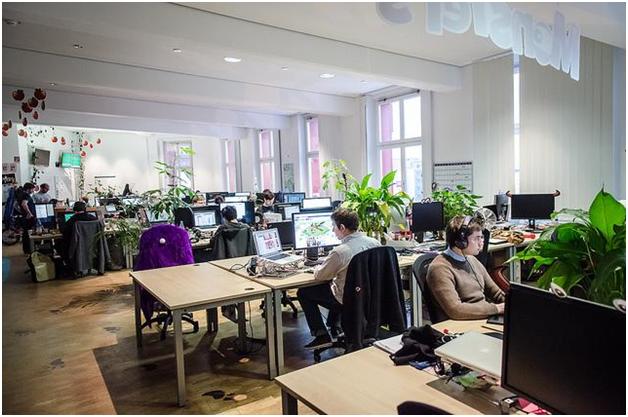 Are we agitated by lemon yellow? Are we calmed by sage green? Are we happier with orange? People from our most ancient ancestors onwards have attempted to understand our relationship to colour. As many of us spend the better part of our waking hours in an office, it makes sense to want to create an atmosphere that supports the type of work being done. So during the design phase, in addition to selecting office furniture, you should consider what some colour psychology experts have to say about the walls that surround us.

The human eye is able to distinguish about 10 million colours, contained within only a small portion of the electromagnetic spectrum. This section is called visible light, and what’s contained therein are wavelengths of different sizes that read as colours for us. The human eye cannot detect energy outside of this band, but we know it’s there: ultraviolet light has a shorter wavelength than what produces the colour violet, and what we don’t see can burn us. The infrared section, on the other end, has long wavelengths and can make things feel hot even as it remains invisible to us.

As regards human response to colours, in this as in all things, each person is unique but there are a few guidelines that can help your office design follow the right track. Grass, pine, sage, lime, amethyst, eggplant, lavender, mauve: remember that within each of the seven “colours” of the visible light rainbow, you have millions to choose from.

Be calm, cool, and collected

The short wavelength colours reside in the range from violet to green.

Blues: the calming effects we note in our personal lives (think daydreaming over Caribbean photos) extend to the work environment. In the office, blue supposedly keeps us steady and focused while still being creative; according to an article in Fast Company magazine, it also fosters trust and good communication. A study by the University of British Columbia suggests that the qualities imparted by blue make it good for rooms where people are working collaboratively.

Greens: these shades promote creativity with their freshness, so researchers suggest it for companies that need innovation and out-of-the-box thinking.

Yellows: this is universally considered an optimistic colour, but some studies indicate that too much of it or bright shades can make us agitated and prone to arguing.

Reds: bright red actually does raise our heart rates when we see it, but the shade can be used in go-go environments that need people to be alert and perhaps a bit edgy, though it seems that being a stock trader would be enough for anyone’s heart rate. To inject a little blood-pumping excitement, try an accent wall in a brick red.

If there are colours that you or your team really like but that come with some cautions, such as lemon yellow, try using a more calming or neutral shade on most of the walls and using that punchy colour on an accent wall that isn’t directly in front of desks or surrounding everyone in a conference room.