Samsung Galaxy S2 – the one that we know with 1.2GHz, but the South Korean company “might” be working towards two things to bring in addition to the current Galaxy S2 – first, the company is planning to bring the new version with “Plus” category – name as Samsung Galaxy S2 Plus, and second bumping the newer version to 1.5GHz. 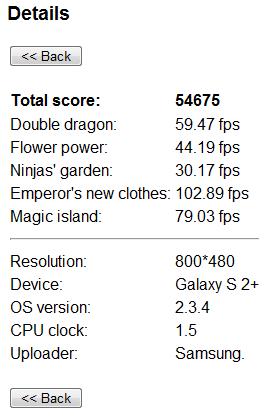 According to the An3DBenchXL’s scores website, the device which has appeared and allegedly uploaded by Samsung testers. PhoneArena listed the device as Samsung Galaxy S 2+ which results as: Resolution – 800*480, OS Version – 2.3.4 and CPU clock – 1.5.