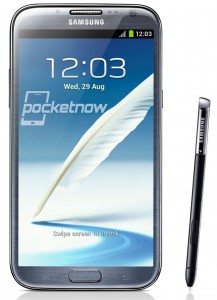 While we are just an hour and half away from Samsung IFA 2012 press conference, PocketNow revealed details as well as pictures of Samsung’s Galaxy Note II. The tablet which look somehow alike to that of the Galaxy S III, features a 5.5-inch, 1280 x 720 Super AMOLED screen, quad-core 1.6GHz processor, a 3,100mAh battery and either 16GB, 32GB, or 64GB of storage, expandable via microSD. The device will run on Android 4.1 Jelly Bean and will be sold in Marble White and Titanium Grey version colors. There are no words on pricing and availability yet but we expect that company will launch the device today at its press conference.

Stay tuned with us and we will update you will all live happenings at IFA 2012 Berlin. For all upto date IFA 2012 news, click here.