Since from the Middle Ages, tradesmen who supplied goods and services to the British Royal Family have received the formal recognition, then it may accounts for either a watchmaker, a haberdasher or in today’s times, a computer maker or a dry cleaners, such royal warrants gives holder the right to place a coat of arms on company holdings for the period of next five years.

According to the British Monarchy’s official website, “Royal warrants are granted to people or companies who have regularly supplied goods or services for a minimum of five consecutive years to The Queen, The Duke of Edinburgh or The Prince of Wales.” 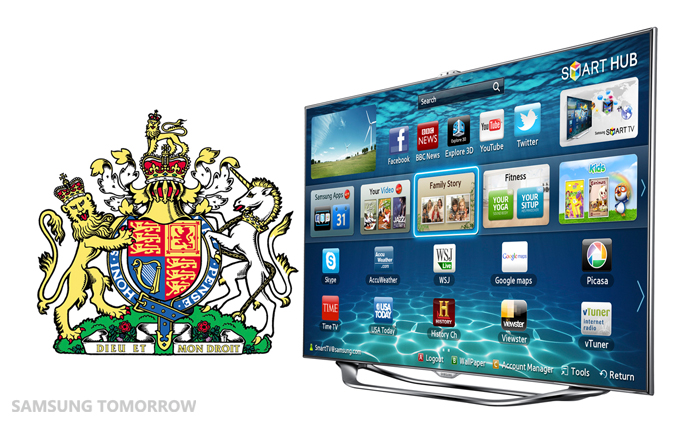 Today, the South Korean electronics giant, Samsung has confirmed that it has been awarded with the honour of Queen Royal Warrant, which it says is the first ever for a AV/TV product manufacturer – the centuries-old recognition is considered quite an honor, since it indicates the product has been used in by the royal family for at least five years, thus certifying the products’ excellence, said the company.

The South Korean firm became the first official provider of TVs to the royal family way back in 2006, and since from then up until 2011, Samsung provided around 100 premium TVs and AV devices to the royal family, including 24-hour maintenance by a “royal family service team.” So with all this the company plans to brand its British headquarters which is based in Surrey, and its stores, with the Queen’s coat of arms. Furthermore, product catalogs, the UK homepage, and other official notices will also be branded with the royal emblem.