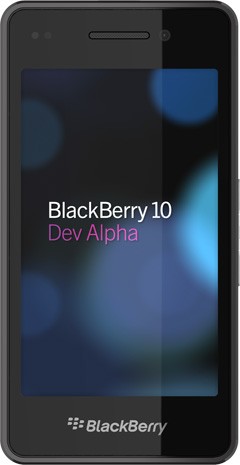 BlackBerry maker Research In Motion officially took the wraps off its new BlackBerry 10 Alpha at the company’s annual meeting with customers, developers, and press. With RIM’s future on the line, the company’s CEO Thorsten Heins took to the stage on Tuesday to outline the company’s future.

“We’re taking our time to make sure we get this right,” Heins said of the transition. “We’re making incredible progress on BlackBerry 10.”

“We will be there later this year with an exciting device,” Heins said. “This is not the final hardware.”

“You are people of purpose,” Heins told the audience. “You believe the more you put into life the more you get out of it. You do more and you get more done in a day.”

“We don’t even call it a virtual keyboard,” he said. “It’s simply the next substantiation of our keyboard technology. It draws on what’s core to our DNA as a company. And that’s about making the BlackBerry a communication and productivity device.”

The alpha units will feature a jaw-dropping 4.2-inch, 1280 x 768 displays that best the 720p panels found on other similarly-sized handsets. The device sports 16GB internal storage and 1GB of RAM. It’s not a prototype, it’s not a phone that will ever be released, and RIM wants to make very clear that it’s not necessarily indicative of what future BB10 phones will be.

The company what it exactly is a device that developers can use to create BB10 apps. With the ongoing keynote, it is expected that RIM will never give up on physical keyboards entirely, but it is clear that company was focused on making an all-touch device work as a BlackBerry device.