The social giant two days back introduced an organ donor status to Timeline. Facebook on any given day more than half a billion people share billions of stories, updates and photos. The move has the potential to help the over 114,000 people in the US and millions abroad waiting for transplants, both by spreading knowledge about organ transplantation and providing an online record of your registration. Since the time announcement was made, the Donate Life California registry has had an 800 percent increase in its organ donor registrations. “As of 12:30pm today, the Donate Life California registry has increased its online donor sign ups by nearly 800 percent from yesterday thanks to this morning’s announcement of the partnership with Facebook! Thank you Facebook!” the California registry posted on its Facebook page. 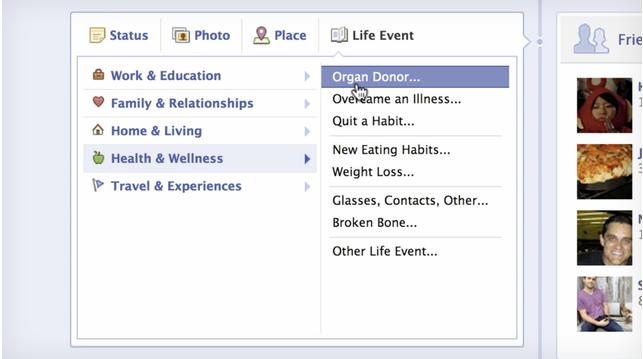 “Many of those people — an average of 18 people per day — will die waiting, because there simply aren’t enough organ donors to meet the need,” Zuckerberg and Sandberg wrote. “Medical experts believe that broader awareness about organ donation could go a long way toward solving this crisis. And we believe that by simply telling people that you’re an organ donor, the power of sharing and connection can play an important role.” “We never could have anticipated that what started as a small network would evolve into such a powerful tool for communication and problem solving,” Zuckerberg and Sandberg wrote. “As this happens, we hope to build tools that help people transform the way we all solve worldwide social problems.”