Yesterday we caught a 22 seconds video posted by Finnish mobile maker, Nokia on its YouTube channel revealing some kind of announcement it is going to made at Mobile World Congress which is starting early next week – adding to this, a tweet has caught the eye of the Windows Phone developer which is pointing towards that the mobile maker giant is coming with its camera-focused handset that could be a Windows Phone device. 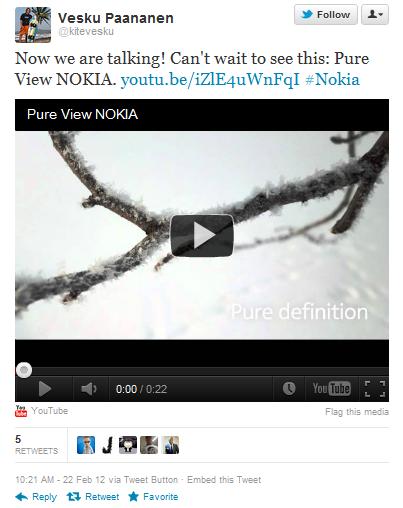 The tweet itself in simple words states that “Now we are talking! Can’t wait to see this: Pure View NOKIA. http://youtu.be/iZlE4uWnFqI #Nokia.” – the tweet was crafter by the Finland’s Windows Phone lead – well knowing to this, we do certainly hope that he would be less eager either as if it was a Symbian handset over the virtue and he is certainly in the stronger position to know as MWC is just a few days away as of now.