Seems like in tones of Google’s upcoming cloud storage Google Drive, Microsoft already in urge of making huge mark – now reportedly seeing expanded its storage tiers and desktop apps for Windows and Mac OS X, Brazilian site Gemind reveals. The software giant has been making huge improvement to its cloud storage service SkyDrive – it worked in integrated it into Windows Phone “Mango”, improved its HTML5 video support capabilities and even moving at par released apps for both Windows Phone and iOS.

According to Brazilian publication, it has pointed out screenshots from the web interface of SkyDrive that clearly indicating the advertisers’ downloadable clients for both Windows and Mac – along with this it has revealed the storage capacity along with the pricing bands for the extended service – above and beyond the standard 25GB of free storage – a user can get an additional 20,50 or 100GB more storage a fee and the price comes at (+)20 for $11/year, (+)50 for $27/year and (+)100 for $54/year. 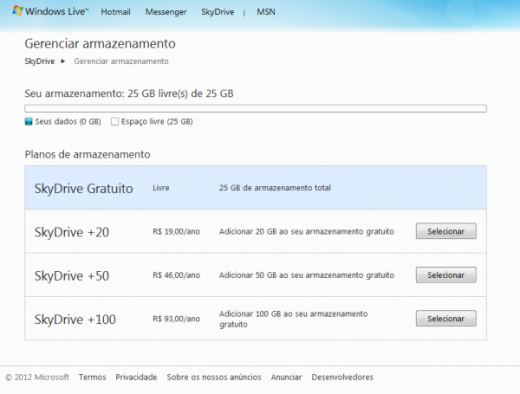 This additional add-on will surely gives a bigger smile on SkyDrive lovers as with such a price band it will also make accessing your SkyDrive easier and faster than the web interface. Well, asking or thinking beyond this it is better to ask SkyDrive users directly that what they think do this add-on – new tiers will make you happy or not?