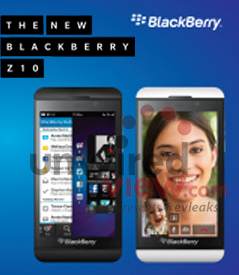 With earlier words from Tinhte.vn, we now have confirmed reports on what would be the first name of the BlackBerry 10 phone: the BlackBerry Z10, thanks to a leaked image posted on Unwired View. The publication citing a leaked piece of promotional material from a trusted source revealed a phone which is much look like the L-Series as we seen in earlier in both black and white, along with text reading, “The New BlackBerry Z10.”

The L-Series or Z10 is an all-touch device and is expected on January 30th, when RIM holds its official BlackBerry 10 launch event. There are no words on proper specifications the phone do holds, although from quite some time it supposed to be having a codename London. Well, we will update you more as soon as further information rolled out in the web.