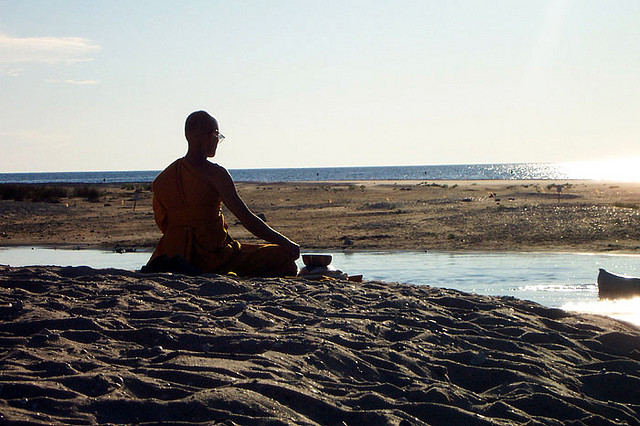 In a world of constant change, there is one thing that remains the same. People everywhere find themselves living under increasingly stressful conditions. Part of the blame lies with the internet and its pervasiveness in our lives; 24 hours a day, seven days a week, 365 days a year.

For all the challenges that the average person faces, the rich and famous suffer as much, if not more. The demands by others on their time is incredible, rapidly increasing with their rise to prominence.

Perhaps it’s no surprise that many in this situation seek help in coping with the stress of success. Some turn to technology, like the apps featured in “24 Tools To Simplify Your Life”, Others look towards meditation for their salvation. In fact, many cultures recognize meditation for its anxiety reduction and mental health enhancement benefits.

The roots of meditation date back hundreds, if not thousands of years. With it comes a great deal of reverence and ceremony surrounding these particular rituals.

There is a 900-year-old tradition surrounding Zen, where Buddhist monks carefully prepare their tea in a particular fashion. Only after consuming their tea are they ready to meditate.

According to the Matcha Tea blog, the particular tea they drink has a very low amount of caffeine, so that they can remain calm during their meditation. This certainly stands in stark contrast to the caffeine infused cup of coffee consumed by the majority of North Americans every morning.

The most famous practitioner of Zen Buddhism is none other than Dalai Lama. Other notable Zen practitioners include Richard Gere, Tina Turner, Orlando Bloom and Leonard Cohen.

If you are a child of the 1960’s, then you are probably aware of Transcendental Meditation, which was popularized by the Beatles. John, Paul, George, and Ringo were so enthralled by the practice that they went on a trek to India to study with renowned guru Maharishi Mahesh Yogi.

Transcendental meditation is a “technique for avoiding distracting thoughts and promoting a state of relaxed awareness,” according to WebMD. In its simplest form, you sit in a comfortable position, close your eyes and silently repeat a mantra. This mantra is a sound, devoid of meaning, that comes from the Vedic tradition. Each practitioner is assigned their unique personal mantra by a certified instructor.

These days pop culture icons Russell Brand and Katy Perry are exposing a whole new generation to this form of meditation.

Primordial Sound Meditation (PSM), created by Dr. Deepak Chopra and Dr. David Simon is a modern interpretation of Transcendental Meditation. Despite its title, PSM is actually a silent practice where a personal mantra is silently repeated until a deeper of spiritual awareness is attained.

According to Deepak Chopra, “Primordial Sound Meditation isn’t about forcing your mind to be quiet, it’s about experiencing the silence that’s already there and making it a part of your life.”  Rumors are that Lady Gaga is a fan of this particular meditative technique.

Known as the personal favorite of both Sting and Jennifer Aniston, Lululemon refers to Kundalini as the “yoga of awareness.” Not strictly a meditative practice, this form of yoga builds strength and releases energy at the base of the spine. At the same time, it’s one of the most spiritual forms of yoga, focusing on both physical and mental aspects.

Existing since 500 B.C., Kundalini is one of the oldest forms of yoga that remained hidden from the Western world until 1969. It was in this year that Yogi Bhajan revealed Kundalini publicly for the first time.

The roots of meditation stretch back thousands of years and modern culture continues to discover its many benefits. Take any famous person, and the chances are good that meditation has touched their lives too.

About the Author
Stephen Jeske

Stephen Jeske is a freelance writer and editor who wonder if meditation is the route to his 15 minutes of fame. Follow him on Twitter @stephenjeske where he regularly tweets about content marketing.