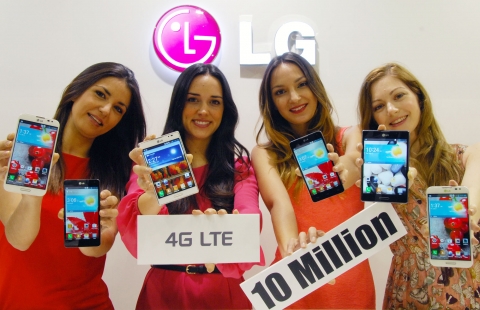 According to the latest figure released today by LG, the company reported that it has sold over 10 million LTE smartphones worldwide with aiming to double the figure by the end of 2013. The Korean company back in August 2012 last year unveiled that it had sold 5 million LTE smartphone units, giving an overwhelming sales unit rate of over 830,000 sales each month. LG believes that the sales are because of company’s “early entry into the LTE market and its leadership in LTE research and development.”

“Aggressive pushing forward with 4G LTE technology allows LG satisfy the needs of consumers and is a huge factor in our growing success in global LTE smartphone sales,” said Dr. Jong-seok Park, President and CEO of the LG Mobile Communications Company. “Having established ourselves as a major industry player, we will continue to expand our footprint in the global LTE market with a wider range of differentiated, high quality LTE smartphones.”