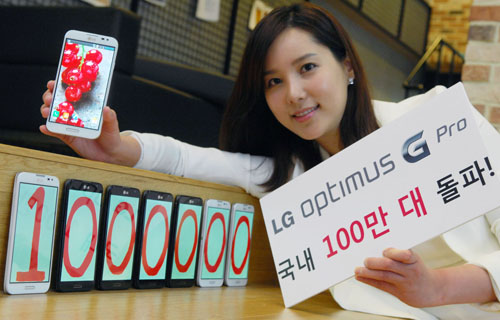 Not making big enough as that of Samsung, but still LG having something to share with all today: the company today shared that its LG Optimus G Pro topped 1 million sales in South Korea, means the device sold at an average rate of 8,000 units per day. The company says that the device is well received in the market although the numbers are not that much good as compared to its rival in its own home ground.

The Optimus G Pro features Qualcomm Snapdragon 600 processor, a 1.7GHz Quad-Core CPU and Adreno 320 GPU. It further includes 3,140mAh battery and 2GB RAM 5.5-inch 1080p Full HD IPS display with having a resolution of 1920×1080 pixels at 400ppi. The company recently announced that it had rolled out the device in Asia region last month.