With Apple’s last week big announcement of next instalment of iPhone, the iPhone 5 and it’s first set of reviews already present over the web. The devices features a lot more good and better things everyone expecting from quite a longer time, and when it comes to price, it goes like this: $199 for 16 GB, $299 for 32 GB, and $399 for 64 GB.

Well, majority of you already had placed a pre-order for the device, with others on the way of doing so, but it would be interesting for you to know that according to market research firm iHS iSuppli, a 16GB iPhone 5 costs Apple an estimated $207 to build. 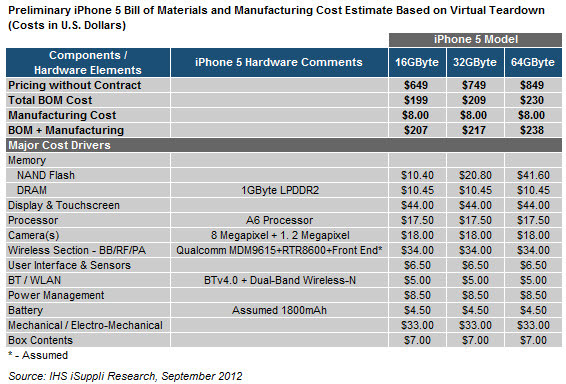 The total hardware inside a whole new 16GB iPhone 5 model costs an estimated price of $199 with another $8 added for manufacturing costs, bringing the total to $207. In context to it, the company is charging the price of $649 for the handset now that shows a clear picture on what Apple making on selling per unit.

Along with this, the breakdown cost of 32GB and 64GB models comes at $217 and $238, in one phase, Apple really making big money, thanks to its iPhone 5. (Well, anyways, not to forget its reviews).