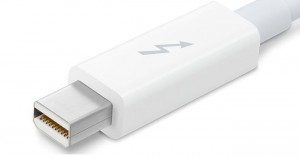 It was expected that when Intel initially announced Thunderbolt interface, the chipmaker company will utilize the fiber optic cables which allow faster transfer speeds across longer distances, but in order to reduce prices, later on copper cables made debut. Intel originally developed Thunderbolt to be both backwards and forwards compatible.

Thunderbolt was co-developed by Apple and Intel and is considered a faster alternative to USB 3.0, with transfer speeds of up to 10 Gbps. A full-length, high-definition movie can be transferred from an external storage device to a laptop in less than 30 seconds. Intel has told Macworld that the company is finally coming up with those optical cables by the year end. There are no details regarding pricing or release date has been provided.