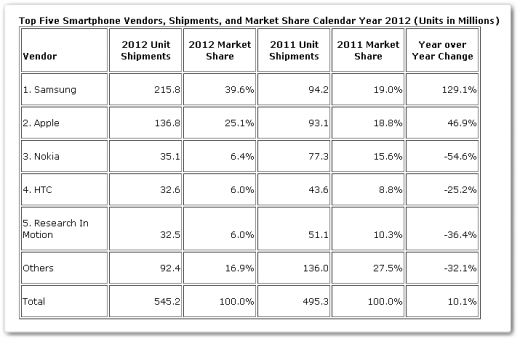 With both Apple and Samsung quarter results are out now, the research firm IDC in its latest report concluded that the worldwide mobile phone market grew 1.9% year over year in the fourth quarter of 2012 with Samsung shipped record 63.7 million smartphones with its year-long total grew 129% to 216 million. Vendors shipped a total of 482.5 million mobile phones in fourth quarter 2012 compared to 473.4 million units in the fourth quarter of 2011, while for the full year, the global market for mobile phones declined 0.2% on shipments of more than 1.7 billion units.