According to the International Data Corporation (IDC) Worldwide Quarterly Mobile Phone report, Samsung widens global smartphone lead, while Nokia drops from top five spot. The report revealed that the mobile phone market grew 2.4% year over year in the third quarter of 2012 with vendors shipped a total of 444.5 million mobile phone in the quarter as compared to 434.1 million units in the same quarter a year ago. 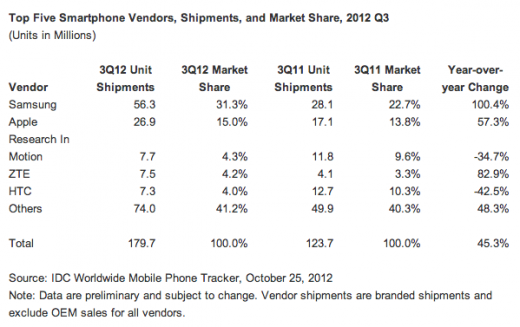 “Nokia’s share losses have meant gains for competitors,” said Kevin Restivo, senior research analyst with IDC’s Worldwide Quarterly Mobile Phone Tracker. “The company’s transition away from Symbian-powered smartphones to ones shipped with Windows Phone has left ample opportunity for rivals to steal share away from Nokia over the past 18 months. However, the smartphone market is still relatively nascent, which means there’s room for multiple vendors and operating systems to flourish, including Nokia.”