According to data from Experian Hitwise, Facebook was the site with the largest share of visits across the Internet in Brazil last weekend, with 10.86% of visits on Saturday (14) and 10.98% on Sunday (15) whereas Google Brazil was second in the same period, with 10.85% and 10.55% respectively. This is an important milestone for the company, in a market it only recently managed to dominate. As we reported, Facebook finally became Brazil’s most popular social network last January, overtaking Google’s first social network, Orkut. 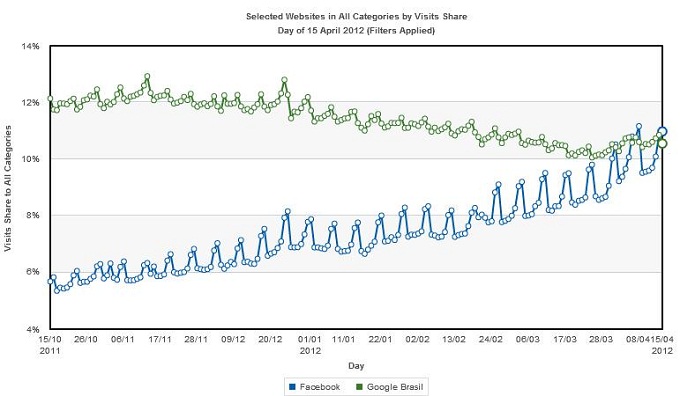 Over the past six months, Facebook has registered a growth of 5.30 percentage points (pp) and a relative increase of 86.73%, 5.88% when he left for the participation of 10.98% recorded last Sunday. During the period, the site also surpassed the rival Orkut, a fact first recorded on 19 December 2011, but only if consolidated from January 9, 2012. In the meantime, they swung position in the ranking sometimes daily. Seems like Google’s Orkut finally got its rival.

Facebook surpassed Google Brazil to become the most visited site by Internet users in Brazil over the weekend: migre.me/8Isug