Thai technology blog ThumbsUp spotted that the deal-of-the-day site Groupon in Thailand goes live before any of the officially launch date indicated – so far the site only providing an introduction to allow customers to register to receive confirmation stating when the service is launched. 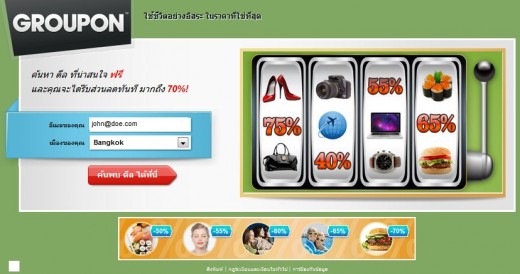 An advertisement on the Thai Visa forum seeking a rangs of employment positions within the company as it is looking out to build its founding team and to develop Groupon Thailand into a regional power – the firm earlier hired its executive team and even pushed out adverts all around for middle management team.

The company launched in Thailand as an official with the domain name. Groupon.biz. that we believe is a temporary domain but to make a better impact on the people over there it is really required by the company to have cTLDs registered like Groupon.co.th – well to really make a mark, Groupon still have to figure out a lot of things.