comScore has released its qSearch analysis of the US search marketplace with Google sited led the explicit core search market in April with around 66.5 percent of search queries, up by 0.1 percent points) conducted. Google sites percentage followed by Microsoft Sites with 15.4 percent (up 0.1 percentage points) and Yahoo! Sites with 13.5 percent. Ask Network accounted for 3 percent of explicit core searches, followed by AOL, Inc. with 1.6 percent. 17.1 billion explicit core searches were conducted in April, with Google Sites ranking first with 11.4 billion. Microsoft Sites ranked second with 2.6 billion searches, followed by Yahoo! Sites with 2.3 billion, Ask Network with 511 million and AOL, Inc. with 271 million. 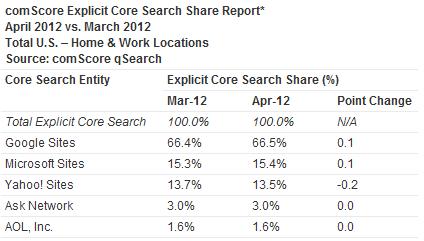