It’s a Google-y day last evening when the search giant first officially announced its long awaited cloud storage service Google Drive followed by increasing storage allowance for both Google Docs and Gmail to 5GB and 10GB respectively. The company did one more addition but that is for its social networking site Google+ by introducing Google+ Share button. You’ll start seeing the red and white icon attached to various articles around the web, including all of our own, and clicking it will give you the option of posting the article to Google’s social network and who to share it with. Once you’ve shared, the colors will invert from red-on-white to white-on-red. If you’d like to add the button to your own site, you can get the code from Google Developers, and site owners using the button already will be automatically upgraded to the new one. 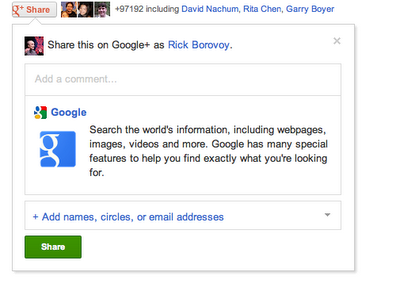