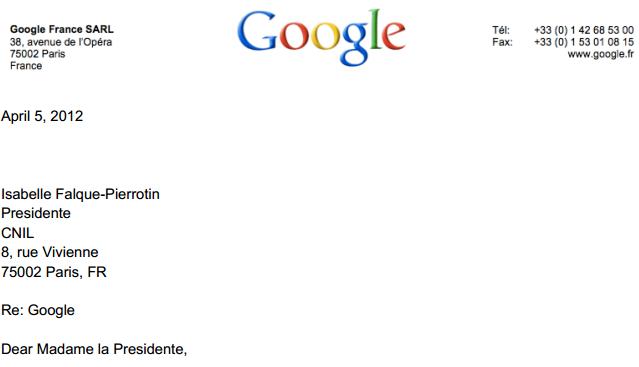 European Union France-led investigation stated that Google’s new privacy policy may violates the European Law, confirming over on this EU justice Commissioner Vivian Reading says it breaches the union’s law. Google, whose new single policy is into effect since from March 1st – consolidating 60 products different privacy policies into one – in order to make things clearer and simpler.

The search giant has responded back into the matter, in a letter [PDF] to France’s National Commission for Computing and Civil Liberties (CNIL), the company addresses 24 of the 69 questions it was asked in a March 16th letter from the body, stating that the company has “worked hard” to provide a policy that is easily understood by users, and that if the body looks beyond the Privacy Policy alone, Google’s products in total follow “the requirements of European data protection laws.”

Google’s global privacy counsel Peter Fleischer states that such a move wouldn’t have been feasible after the company had moved forward with a notification campaign across all of its products. Stating that a delayed rollout “would have proved confusing to our users,” Fleischer also criticizes European regulators for speaking to the media about their concerns. “We find it disappointing that some regulators publicly express doubts of lawfulness without having accorded us any chance to engage on the issues of concern,” he writes, noting that Google pre-briefed 18 different regulators on its intentions, none of which asked the company to “pause” its implementation of the new policy. Google will be answering the rest of the questions by April 15th.